Since Vladimir Putin’s return to the presidency in May 2012, several federal laws have been amended, restricting core fundamental rights in Russia. These changes have been widely criticised as an unprecedented crackdown on civil society and an attempt to create a general climate of intimidation and censorship mainly based on the protection of ‘traditional values’.

In June 2012, the fines for unauthorised assemblies were drastically increased: to around €25 000 for organising an event, and to €7 000 for participation. Critics argue that the amendments have been devised to stifle the vast protest movement triggered by the 2011 parliamentary elections and Putin’s re-election. 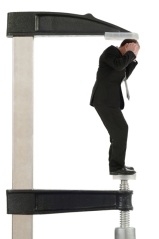 In force since November 2012, the ‘foreign agents law‘ requires foreign-funded non-governmental organisations (NGOs) engaging in vaguely defined ‘political activities’ to register as ‘foreign agents’, a term which de facto stigmatises them as foreign spies. It allows for spot inspections, introduces labelling and reporting requirements and provides for harsh criminal penalties and administrative fines of up to €11 500 for failure to register. In practice, many NGOs have boycotted the new law. In February 2013, 11 Russian NGOs appealed to the European Court of Human Rights, arguing that the law violates their right to freedom of association and expression. Large-scale inspections were launched to verify the law’s enforcement, with over 1 000 Russian NGOs being checked by September 2013. The court declared 22 NGOs, which refused to register, ‘foreign agents’. A first official complaint against the law was filed with Russia’s Constitutional Court in August 2013. The Council of Europe’s Commissioner for Human Rights pointed to the law’s unjustified discriminatory nature, stating that the same reporting and accounting require­ments need to apply to all NGOs, regardless of the source of their income. The EU’s High Representative, Catherine Ashton, expressed concern about the searches of Russian NGOs, based on vague legal grounds, which risks further undermining civil society activity.

An anti-gay propaganda law was adopted by the Duma in a 436-0 vote in June 2013. It sanctions “propaganda of non-traditional sexual relationships” to minors as an administrative offence, with fines ranging from €90 for individuals up to €23 000 for organisations. Public opinion polls show that the Russian public strongly supports this law. Commentators deplore the ambiguous wording of the provisions which ban virtually all Lesbian, Gay, Bisexual, Transgender and Intersex (LGBTI)-related material. Since their adoption, homophobic violence against LGBTI citizens has been on the rise. Critics are concerned about the law being used by anti-gay groups to legitimise their assaults on LGBTI individuals, with police rarely intervening to protect victims. The Council of Europe’s Venice Commission concluded that the law is incompatible with the European Convention on Human Rights (ECHR) and international human rights standards, and recommends repeal. Ahead of the 2014 Sochi Winter Olympic Games, there has been controversy over gay athletes and spectators risking discrimination or even legal action, but Russian officials have dismissed Western criticism as ‘invalid and groundless’.

In the wake of the trial of the band Pussy Riot, a new blasphemy law was adopted which provides for prison sentences of up to three years for ‘offending religious feelings’.

In its June 2013 resolution on the rule of law in Russia, the EP called on the Russian authorities to refrain from registering NGOs as ‘foreign agents’ based on a law which stigmatises them and creates a hostile atmosphere for civil society. It expressed deep concern at the negative impact of the law on ‘homosexual propaganda’, which could increase discrimi­nation and violence against LGBTI individuals.