What an extraordinary year for the EU: EPRS-EUI conference on 2014

The European Union has undergone major changes in 2014, which bodes well for its ability to regain citizens’ trust and put behind the economic crisis. The EU’s institution have grown stronger, but they need to play their cards well to stem the tide of radical euro-scepticism,  academics and politicians told a conference in the European Parliament (EP) on December 11.

“It was a watershed moment in the institutional development of the European Union,” EP Secretary General Klaus Welle said about 2014, summing up the conference, organised jointly the European Parliamentary Research Service (EPRS) and the European University Institute (EUI) in the EP’s library. 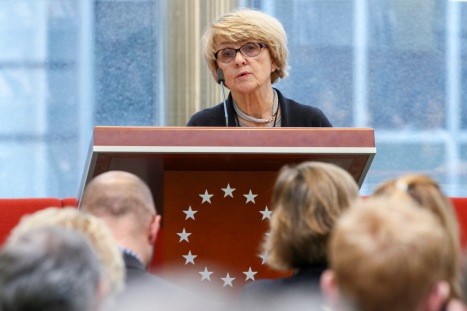 The three-hour event entitled  “The institutional significance of 2014 in the European Union – the European elections, Spitzenkandidaten and Juncker Commission” gathered former and currents MEPs, officials, intellectuals and students.

It focused on the institutional shift in the EU that occurred thanks to linking the European elections to the choice of the president of the European Commission. The move strengthened both institutions and improved the EU’s democratic legitimacy, most speakers said, warning however against complacency and urging hard work to lift the Union from its post-crisis doldrums.

It was the first conference under a new cooperation agreement between the EPRS and EUI.

“These policy roundtables are designed to share knowledge, analysis and expertise as well as deepen the debate about the big issues facing the European Union,” EPRS Director General Anthony Teasdale said in a welcoming address.

Professor Danuta Hübner, chairwoman of the Committee for Constitutional Affairs and former European Commissioner provided economic, social and political context for the changes in 2014 in a key note opening speech.

The protected economic crisis has undermined faith in the European integration and legitimacy of the EU, she said. Despite signs of economic revival, the Union badly needs a pro-growth push that would prevent extremists from building political capital on populism. Since the European Central Bank’s monetary policy will not suffice, the EU needs more reforms. The investment package of Commission President Jean-Claude Juncker is a step in the right direction, although it will bring results only in the medium-term.

Hübner chaired the first panel devoted to elections and the story behind the choice as head of the Commission of a candidate put forward by a family of political parties that topped the ballot.  The election-wining European People’s Party (EPP) proposed Juncker for the job, and the Commission chief he did become, despite initial opposition of some prime ministers and heads of state who wanted to stick to the tradition of making the choice themselves in a backroom deal at a summit.

Thomas Christiansen, Jean Monnet Professor of European Institutional Politics and Co-Director of the Maastricht Centre for European Governance at Maastricht University, said the EP won the battle with the European Council because it was generally united while EU leaders were divided and had no obvious candidate. EP President Martin Schulz and Socialist candidate for the top Commission job deserves special credit for enforcing a new system thanks to his relentless support for the “Spitzenkandidaten process”, but also because he supported Juncker within 24 hours after the election result was announced.

Christiansen said the “Spitzenkandidaten process” was generally positive as it helped to develop the European perspective on key issues and has the potential for developing the European public sphere.

But the grand coalition of the EPP and Socialists that finally supported Juncker, their eager cooperation and blurred left-right division could mean that the electorate could feel deprived of a real choice, Christiansen cautioned. “The protest vote will not go away,” he said.

Doctor Diego Garzia, a Research Fellow at the European University Institute, presented his extensive research on Voting Advice Application, an Internet device that allowed people to match their views with programmes of political parties running in the elections.

The question and answer time was introduced by former British MEP Andrew Duff, who asked not to forget about the role in promoting the  “Spitzenkandidaten process” played by former Commission President Jose Manuel Barroso and former French Commissioner Michel Barnier, who lent it legitimacy by seeking the EPP for the Commission post.

In the second panel, Richard Corbett, the EP rapporteur for the hearings of the commissioners, spoke his view on the process. He stressed that the EP’s power is visible in those hearings, which have become an unquestionable practice even though they are not provided for in the treaties. Votes in the committees on candidates for commissioners have no legal standing, yet they can change the line-up of a future Commission and adjust the assigned portfolios. Corbett suggested some improvements to the hearings, such as earlier appointments of commissioners-designate and fewer questions at the hearings accompanied by a possibility of follow-up queries.

Professor Brigid Laffan, Director of Robert Schuman Centre at the EUI, asked in her presentation whether there are limits to the rise of the EP’s power, which started in 1979 with practically nothing. Enforcing “the Spitzenkandidaten process” meant another increase in the legislature’s power and had welcome side effects of personalising the European debate and making the Commission more political. “Juncker used the word political more times in six month than Barosso in 10 years,” Laffan pointed out. But she cautioned the EP and Commission against triumphalism and undermining the authority of the European Council. “The European Council remains crucial… It is the core of the Union’s political authority and centre of its legitimacy,” she said.

Petr Novak addressed the question  whether the new Commission can be considered as more political than in the past and what questions this raises for its internal organisation and relations with the other institutions. He discussed the challenges this brings for the European Parliament in terms of legislative cooperation and scrutiny.

He concluded that the Commission needed to be more reactive and efficient by both encouraging the vote and upholding collegiality. As for the EP, it will have to choose  whether to follow  principles of coalition cooperation instead of upholding its institutional independence.

Wrapping up the conference, EP Secretary General Welle said “the Spitzenkandidaten process” was a breakthrough for the European democracy, allowing the citizens to decide who is in charge. Without this choice, the EP vote resembled some national by-elections, he said. Welle lauded Juncker for creating a new structure of the Commisison, which will avoid disarray accompanying debates among 28 commissioner and allow it to focus on concrete outcome rather than the bureaucratic process.

2 thoughts on “What an extraordinary year for the EU: EPRS-EUI conference on 2014”