In 2003, the European Union established a biofuels support policy, primarily with the aim of lowering CO2 emissions in the transport sector. Critics have accused this policy of inducing indirect land use change (ILUC), which triggers an increase in global food prices and in food insecurity for the poor, promotes the creation of large land holdings and the use of available (‘marginal’) land in developing countries, and not least, boosts carbon emissions. Most research carried out recently suggests that while concerns regarding food production may have been overstated, those related to ILUC are not, as ILUC can indeed increase the release of CO2 emissions during biofuel production. The biofuels industry argues that it sustains many jobs in European rural areas.

In 2012, the European Commission presented a legislative proposal to address some of these concerns while preserving existing investments. It proposed capping conventional biofuels and promoting advanced biofuels. The proposal is expected to go through a second reading in Parliament and the Council in early 2015.

Parliament has called for a cap on conventional biofuels, a sub-target for advanced biofuels and the consideration of ILUC factors, while stressing the need for a post-2020 policy.

Advanced biofuels are not yet produced on a large scale in the EU. Although in principle they have advantages over conventional biofuels, the technologies are not fully mature, investment is lacking and the sustainability of feedstocks needs to be assessed. 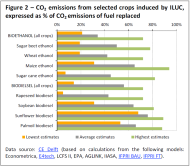