Definition of refugees in international law 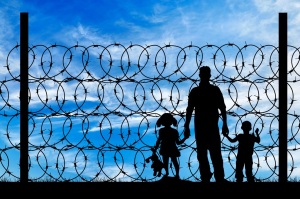 Every year, millions of persons invoke the protection of international refugee law, making it one of the most relevant international human rights mechanisms. The only international legal norms applying specifically to refugees at global level are the 1951 UN Convention relating to the status of refugees (Geneva Convention) and the 1967 Protocol relating to the status of refugees. The Geneva Convention and its Protocol have been ratified by almost 150 states to date (however a number of countries, such as the Gulf States and India, are not among the signatories). The Convention was drafted under the specific conditions of the post-war period, applying only to persons who became refugees as a result of events occurring before 1 January 1951 in Europe. This temporal and geographical limitation was removed by the 1967 Protocol.

Refugees are a special class of migrants who under international law deserve specific protection by their host state. According to Article 1 of the 1951 UN Convention, as modified by the 1967 Protocol, a refugee is defined as a person who ‘owing to well-founded fear of being persecuted for reasons of race, religion, nationality, membership of a particular social group or political opinion, is outside the country of his nationality and is unable or, owing to such fear, is unwilling to avail himself of the protection of that country.’ This definition implies that several qualifying conditions apply to be considered a refugee: (1) presence outside home country; (2) well-founded fear of persecution (being at risk of harm is insufficient reason in the absence of discriminatory persecution); (3) incapacity to enjoy the protection of one’s own state from the persecution feared. The definition of refugees was actually intended to exclude internally displaced persons, economic migrants, victims of natural disasters, and persons fleeing violent conflict but not subject to discrimination amounting to persecution.

A refugee is not the same as an asylum-seeker. According to the United Nations High Commissioner for Refugees (UNHCR) ‘an asylum-seeker is someone who says he or she is a refugee, but whose claim has not yet been definitively evaluated’. In the case of mass refugee movements (usually a result of conflict), the reasons for fleeing are evident and there is no capacity to conduct individual interviews, such groups are often declared prima facie refugees.

Rights of refugees and asylum-seekers

International refugee law or international human rights treaties neither articulate an explicit entitlement to asylum for the individuals concerned, nor impose an obligation on states to grant asylum. Individuals have a right to seek asylum, not to be granted asylum, and the states have the right to grant asylum, but no obligation. The Geneva Convention does not guarantee asylum-seekers the right to be granted refugee status, even if they fulfil the conditions to be considered refugees; this remains at state discretion. States have, however, to refrain from actions that would endanger asylum-seekers, especially from returning them to their country of origin. Each state is also free to establish the conditions for granting asylum. This situation is reinforced by the fact that no body is entitled to interpret the Geneva Convention authoritatively, unlike most other international human rights treaties. The United Nations High Commissioner for Refugees (UNHCR) has the duty to supervise its application, but has no authority to provide mandatory interpretations. The task of interpreting the Convention has thus fallen to domestic law-makers and courts.

Because of their vulnerable situation, asylum-seekers are sometimes forced to enter their country of refuge unlawfully. The Geneva Convention does not stipulate that states are required to grant asylum-seekers entry to their territory. Entering a state party to the Convention unlawfully does not forfeit protection (Article 31) and illegal entrants can still qualify as refugees if they fulfil the relevant criteria. ‘Refugees unlawfully in the country of refuge’ should not be punished for their illegal entry if they come directly from the territory where their life and freedom was threatened and if they report themselves immediately to the authorities, showing good reason for their illegal entry (Article 31). Restrictions on their movement can be imposed until their status is regularised. To ‘refugees lawfully in the territory,’ Article 26 of the Convention grants the right to choose their residence and to move freely. The UNHCR considers that detention of asylum-seekers should be a measure of last resort. It has drafted a set of guidelines for the use of detention of asylum-seekers. In certain countries, refugees are confined to refugee camps and their movement is restricted. In other countries, including in many developed countries, detention of irregular migrants until their status as refugees is determined is a common practice.

The Convention establishes a duty on states to accord rights to refugees that in certain areas are on a par with those of their population, while in others are similar to those granted to the most favoured aliens or to aliens in general. Rights accrue to refugees incrementally depending on the legality of their situation in their host country and the duration of their stay there. The first tier of rights applies merely on the basis of presence within a state party’s territory, even if this presence is illegal. Such rights include freedom of religion (Article 4), property rights (Article 13), the right to primary education (Article 22), the right to access to the courts (Article 16(1)), a limited right to move freely, subject to justifiable restrictions (Article 31(2)) etc. The second tier of rights are to be granted when refugees are ‘lawfully present’ in the host state (for example while their asylum claim is processed), including the right to self-employment (Article 18) and the right to move freely, subject to regulations applicable to aliens in general (Article 26). Other rights are accrued when refugees are ‘lawfully staying’ in a state party (usually after recognition of their refugee status by the state concerned), including the right to paid employment (Article 17) under conditions no less favourable than for other aliens. The right to work without any restriction accrues only after a period of three years’ extended residence (Article 17(2)). The absence in the Convention of a definition of the concepts of ‘present lawfully’, ‘staying lawfully’, or ‘residing lawfully’ affords states considerable discretion in according rights to refugees. In practice, states are free to grant permanent or temporary residence and to assign, or decline rights to work and move freely. This leads to great differences as regards refugees’ rights.

The Geneva Convention definition of refugees remains dominant in the Treaty on the functioning of the European Union (Article 78) and the EU Charter of Fundamental Rights (Article 18). The EU has an extensive set of legislation on asylum-seekers, which has often been the object of critical review by the UNHCR. The Qualification Directive also foresees that other persons entitled to international protection should be treated on a par with refugees.

The principle of non-refoulement

The purpose of the Convention is to assure protection to refugees, as defined in the Convention, by ensuring that they are not returned to their country or sent to any other territory where they could face persecution. Article 33 puts forward what has become known as the principle of non-refoulement: ‘No Contracting State shall expel or return (‘refouler‘) a refugee in any manner whatsoever to the frontiers of territories where his life or freedom would be threatened on account of his race, religion, nationality, membership of a particular social group or political opinion’. This protection does not apply however to persons who represent a security threat to their host country (Article 33(2)). The Geneva Convention does not exclude removal of asylum-seekers to safe third countries. Asylum-seekers unlawfully present in a state can be required to seek protection in another country, but those lawfully present cannot be expelled from its territory (Article 32).

This principle has become part of other international human rights treaties either explicitly (Convention against Torture, Article 3) or implicitly through the relevant jurisprudence (European Convention on Human Rights, Article 3 and International Covenant on Civil and Political Rights, Article 7) and, according to some scholars, also part of customary international law, making it universally binding. While in the Refugee Convention, the scope of the non-refoulement principle is limited to refugees, and exceptions to it (for reasons of national security) are permitted, these limitations do not exist in the other three treaties. States signatories of these international treaties are thus obliged not to return to their countries persons who may face torture or cruel, inhuman or degrading treatment or punishment. They are however not entitled to any other rights provided under the Refugee Convention since they are not refugees within its scope.

Download this At a glance on ‘Refugee status under international law‘ in PDF.

« Science and technology: what do MEPs want to know?
EU Strategy for the Adriatic and Ionian region (EUSAIR) »