Climate ‘refugees’: Towards a possible definition

20 June is World Refugee Day. While those fleeing conflicts are often in the headlines, every year since 2008, an average of 26.4 million persons around the world have been forcibly displaced by floods, windstorms, earthquakes or droughts. This is equivalent to one person being displaced every second. Depending on the frequency and scale of the major natural disasters occurring, there are significant fluctuations in the total number of displaced people from one year to the next, yet the trend over recent decades has been on the rise. Many find refuge within their own country, but some are forced to go abroad. With climate change, the number of ‘climate refugees’ is likely to rise in the future. Due to a lack of a clear definition of the term ‘climate refugee’, however, a protection gap for these persons needs to be addressed.

Our recent briefing, ‘The concept of ‘climate refugee’: Towards a possible definition’ explains that so far, the national and international response to this challenge has been limited, and protection for the people affected remains inadequate. Adding to the gap in the protection of such people – who are often described as ‘climate refugees’ – is that there is neither a clear definition for this category of people, nor are they covered by the 1951 Refugee Convention. This latter extends only to people who have a well-founded fear of being persecuted because of their race, religion, nationality, membership of a particular social group or political opinion, and are unable or unwilling to seek protection from their home countries. While the EU has so far not formally recognised climate refugees, it has expressed growing concern, and has taken action to support and develop resilience in the countries potentially affected by climate-related stress. Of the 186 countries assessed in a recent survey on climate vulnerability, Chad was rated as the one facing the greatest peril. The fact that this country has one of the fastest-growing populations in the world only compounds the problem. In the future, environmental changes could have enormous effects on many populations, especially those in coastal and low-lying areas, such as Vietnam, as well as countries in the Western World such as the Netherlands and certain parts of the United States.

The UN 2030 Agenda for Sustainable Development includes several migration-related targets and calls for regular reviews of progress towards their achievement, using data disaggregated by, inter alia, migratory status. However, the response to the challenges of an annual displacement of millions of persons worldwide due to environmental disasters has been limited, and protection for those affected remains inadequate. Many find shelter within their own country, but some are forced to go abroad, and in the context of climate change, such movements are likely to increase.

To address the issue of such large movements of refugees and migrants, on the UN General Assembly adopted the New York Declaration for Refugees and Migrants on 19 September 2016, in which it called for the development of two global compacts, one on refugees and one on other migrants, both to be adopted in 2018. While the reasons for the internal or international displacement of individual migrants or diasporas vary, the UN Internal Displacement Monitoring Centre (IDMC) and the Norwegian Refugee Council identify natural disasters as the number one cause for this phenomenon. With rising sea levels, desertification and extreme weather events, climate action must be a part of any meaningful agreement on refugees or migrants. Governments are currently negotiating a global compact on safe, orderly and regular migration. The compact is meant to protect the rights of those displaced and help address the root economic, environmental and social drivers that are compelling people to leave their communities and countries. On 5 February 2018, the UN released the draft compact (the Zero Draft), and will have until December 2018 to negotiate the final details. A key area in which the document falls short is on commitments to tackle the primary causes of migration. A stated aim of the compact is to ‘mitigate the adverse drivers and structural factors that hinder people from building and maintaining sustainable livelihoods in their countries of origin’. However, the current text lacks actionable commitments to control the numerous man-made forces underlying global mass migration.

A 2017 Parliament resolution on Addressing refugee and migrant movements: the role of EU external action stressed that EU development cooperation should continue to address and effectively tackle the root causes of forced displacement and migration, including lack of economic opportunities and climate change, in line with Goal 16 in the 2030 Agenda for Sustainable Development and the principles laid down in the UN Charter and international law. It also called on the EU and its Member States to take their responsibilities seriously concerning the challenge of climate change, to swiftly implement the Paris Agreement, and to take a leading role in recognising the impact of climate change on mass displacement, given that the scale and frequency of displacements are likely to increase. It took the view that persons displaced by the effects of climate change should be given a special international protection status that takes account of the specific nature of their situation.

In the long term, it is possible that the conclusion and acceptance of various regional agreements concluded within the remit of the global compact on migration and the international climate change framework would lead to the creation of customary international law. While this clearly remains a far-reaching proposition at present, it is worth recognising that the climate change-related body of law in individual states has developed significantly over a comparatively short time, and that ultimately it is through such state practice that customary law evolves. 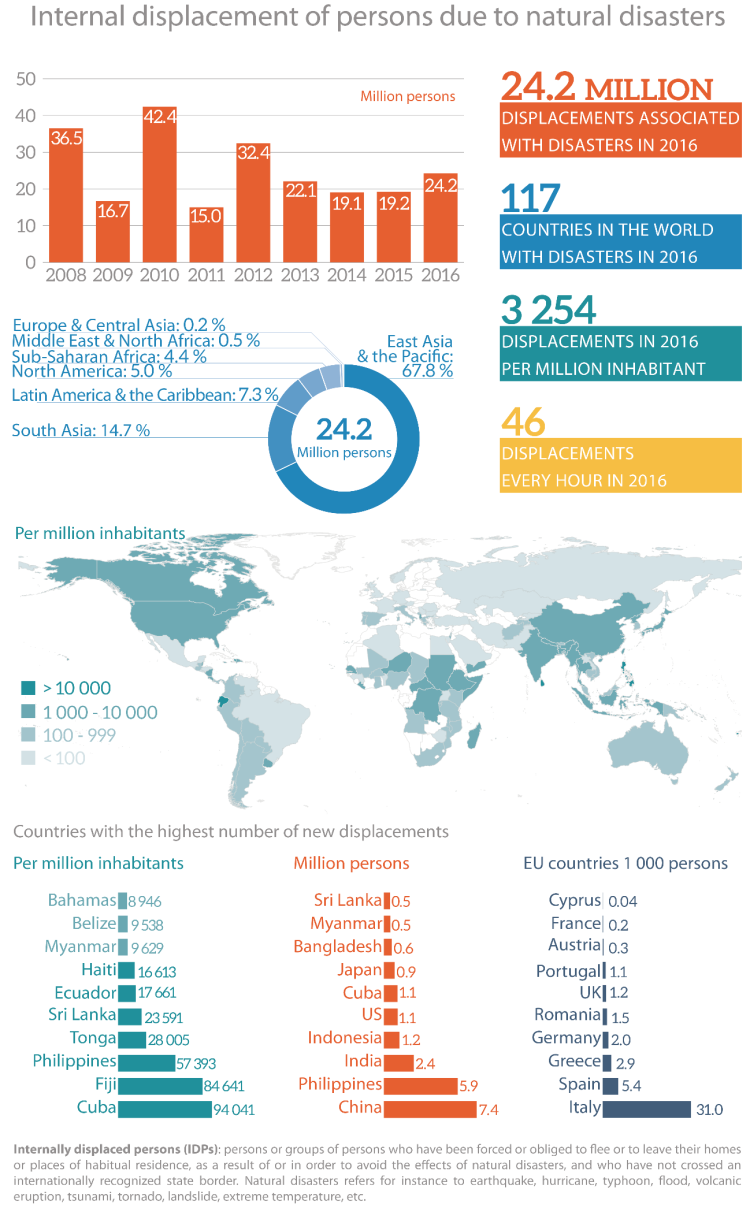 Internal displacement of persons due to natural disasters

2 thoughts on “Climate ‘refugees’: Towards a possible definition”