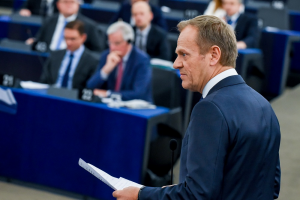 Highlights of the March II plenary session included debates on the conclusions of the 21-22 March 2019 European Council meeting and on recent developments on the Dieselgate scandal. Parliament also debated the situation in Algeria and the illegal occupation of Crimea by the Russian Federation. Important debates also took place on various legislative proposals, including on interoperability between EU information systems. Members voted on a number of legislative proposals (see below), such as discontinuing seasonal changes of time. Parliament also voted on the report on the TAX3 committee’s findings and on 53 reports on the 2017 discharge procedure. Finally, Parliament adopted first-reading positions on nine further proposed funding programmes for the 2021-2027 period.

Members debated the report from Parliament’s TAX3 Special Committee on the progress made and the work still to do to tackle financial crimes, tax evasion and tax avoidance. In response to scandals highlighting the extent of the issue, the committee proposes greater scrutiny over Member States’ tax systems, including eliminating loopholes and greater recourse at national level against money-laundering activities.

Members debated and approved compromise agreements on four proposals for new rules regarding the internal market for electricity. The proposed changes to the rules would give consumers stronger rights when dealing with electricity suppliers, and provide extra protection for vulnerable consumers.

Representative actions for the protection of collective interests of consumers

Parliament adopted, by a large majority, proposals to harmonise the EU rules on representative actions for the protection of the collective interests of consumers. Although the proposed rules do not provide for the type of class action seen in the USA, they seek to make it easier for groups of consumers whose rights are violated to launch a collective action for redress, and to obtain compensation if successful. Only qualified representative entities would be authorised to mount such actions (rather than lawyers), and are required to disclose publicly how they are financed, organised and managed.

Copyright in the digital single market

Ending two years of negotiation, Members adopted a compromise agreement on copyright in the digital single market. This contentious file deals with the opportunities and drawbacks of creating, producing, distributing and exploiting content online, and the balance to be struck between remunerating creators and publishers, and protecting consumers. The file now goes back to Council for final adoption.

Members voted to formally adopt an agreement on a Commission proposal to transpose recommendations from the General Fisheries Commission for the Mediterranean into EU law. The measures, supported in a Fisheries Committee report, aim to encourage fish stock recovery and protect vulnerable habitats in the Adriatic, Alboran and Black Seas.

Members debated three sensitive files relating to overhauling current legislation on road transport. There was no vote on these files and once again, they were referred back to the Transport Committee for consideration. So far, the committee could only reach agreement on the cabotage file, which seeks to clarify the rules for international haulage operations, particularly on minimum turnaround times. Nevertheless, political groups tabled amendments to the proposals on social and market rules that seek to level the playing field between posted and local drivers and improve working conditions. Following a further round of voting in committee, the proposals are due to return for a plenary vote in the April I session.

Parliament voted by a large majority to formally adopt the latest in a series of proposals to amend the Carcinogens and Mutagens Directive to protect workers against exposure to a further number of cancer- or mutation-causing chemical agents. The five priority chemical agents include formaldehyde, cadmium and arsenic, and the measures seek to provide clarity in the workplace for workers and employers.

Members debated and voted, by an overwhelming majority, on legislative proposals on reducing the impact of plastic products on the environment, particularly plastic marine litter. An agreement reached with Council extends bans on products beyond cutlery, plates, and straws to include oxo-degradable plastics and expanded polystyrene packaging. The proposals also set out annual collection rates for recycling plastic fishing gear, among other measures, which could ultimately become binding.

Members debated and approved an agreed text on CE-marked fertilising products. While inorganic fertilisers increase crop yields, they can also contain harmful chemicals, such as cadmium. The agreement proposes gradual reduction of the heavy metal content in fertilisers and extending legislation to cover organic or recycled waste alternatives.

Members debated and adopted a report on the establishment of a framework to facilitate sustainable investment. A joint report from Parliament’s Economic Affairs and Environment Committees underlines that gradual harmonisation of what ‘environmentally sustainable’ actually means will help EU investors to ensure that their investments take account of their environmental impact.

With a view to reassuring EU citizens that taxpayers’ money is properly managed, all EU institutions are required to present their ‘accounts’ for scrutiny on an annual basis. Parliament then makes its ‘discharge’ decisions based on Budgetary Control (CONT) Committee reports on the European Court of Auditors’ annual assessment and the Council’s recommendations. Members conducted a joint debate and voted on 53 reports recommending whether or not to agree to discharge the 2017 budget for the European Commission and all executive agencies, as well as EU joint undertakings (public-private partnerships) and decentralised agencies and the other EU institutions. This year, CONT proposed granting discharge to the Commission and to all six executive agencies, as well as to all eight joint undertakings – subject to some improvements in financial management. The committee recommended granting discharge to all but one of the 32 agencies – the European Asylum Support Office (EASO) – in the light of irregularities uncovered by the European Anti-Fraud Office (OLAF), for which discharge and closure of accounts was postponed.

No decisions to enter into negotiations were announced.