Published on July 15, 2020 in Negotiations on the next MFF and the EU recovery instrument: Key issues ahead of the July European Council ⋅ Full size is 841 × 886 Pixels ⋅ Leave a comment 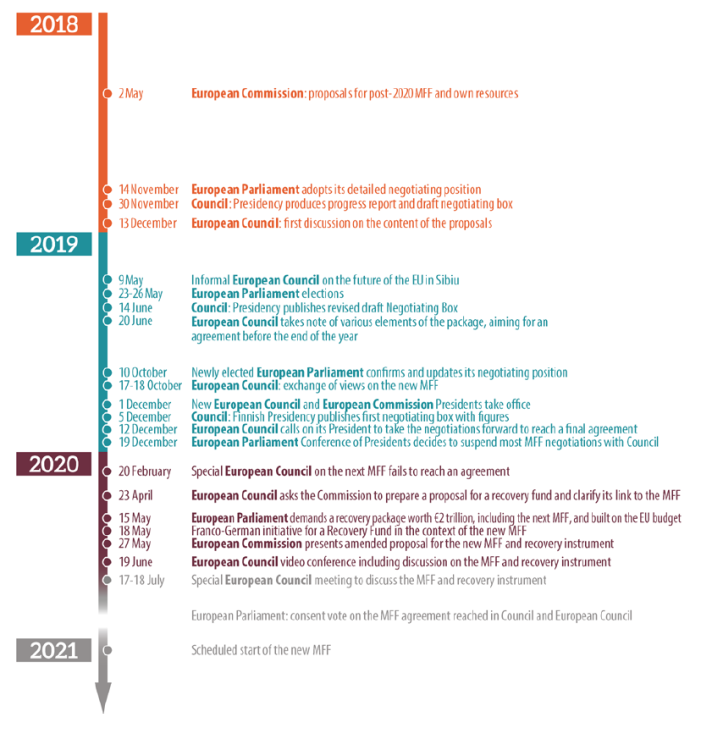 The current negotiations are already about half a year behind the timeline of the negotiations on the 2014-2020 MFF. That time, the political decision at European Council level was reached in February 2013 and the final adoption, following negotiations with Parliament, took place in December 2013, i.e. less than one month before the start of the new financial period. The negative effects of this delay on the implementation process for EU programmes and knock-on effects for their beneficiaries have often been highlighted. This time, however, the need for a swift agreement is compounded by the urgent nature of the recovery instrument, Next Generation EU, whereas the high legal and procedural complexity of the package (see information on procedures in Annex 2) is not conducive to quick decisions. Agreement between EU leaders would open the way to formal negotiations between the European Parliament and the Council. In these discussions, Parliament will be represented by its negotiating team and its President David Sassoli. In accordance with Article 324 TFEU, meetings should take place at the highest political level, between the Presidents of the European Parliament, the Council and the Commission, to promote consultation and reconciliation of positions on budgetary matters. One such meeting took stock of progress in the discussions on 8 July 2020.
An absolute majority of Members is required to secure Parliament’s consent, and internal political negotiations will have to take place. Johan Van Overtveldt, the chair of the Committee on Budgets, has said that Parliament is ready to act swiftly, but pointed out that Parliament has been waiting for Council to find an agreement among Member States for almost two years. He stressed that Parliament has already outlined its demands and conditions for an agreement, that it will use its rights and powers, and that its consent on the MFF should not be taken for granted.
If the Council fails to adopt a new MFF regulation by December 2020, Article 312(4) TFEU extends the annual level of resources available in the final year of the current MFF in each major spending area, as well as other provisions applicable, until an agreement is reached. However, this provision alone cannot prevent disruption to the smooth functioning of the EU budget, since most spending instruments that implement the 2014-2020 MFF expire at the end of 2020 and would require an extension to operate in 2021. The European Parliament has repeatedly drawn attention to this problem and in its resolution of 13 May 2020 called on the Commission to submit a proposal for an MFF contingency plan to protect the beneficiaries of Union programmes by ensuring continuity of funding and implementation.