The European Council and crisis management 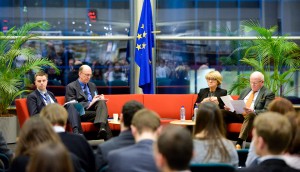 The panel of experts made up of Prof. Danuta Hübner, Chair of Parliament’s Constitutional Affairs Committee, Prof. Desmond Dinan from Georges Mason University, Mr. Didier Seeuws, former chief of staff of first European Council President Herman Van Rompuy, and Mr. Peter Ludlow, from EuroComment, discussed similarities and differences between how the European Council has been and still is handling different crises.

Prof. Desmond Dinan stressed that the European Union (EU) is facing a political crisis of the first order, which is made up of a number of smaller crises. He also criticised the narrative that crisis in the past have supposed to have led to further integration, which in his opinion it had not. The other panellists had varying perspectives on the relationship between crises and further European integration. 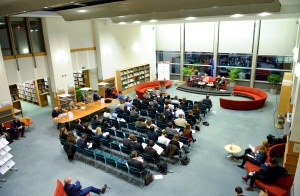 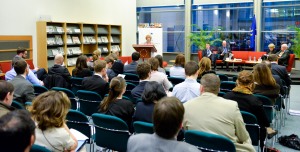 In her opening address, Joséphine Rebecca Vanden Broucke, Head of the European Council Oversight and Scrutiny Unit (ECOS) of the European Parliamentary Research Service (EPRS) outlined that the increasing number of extraordinary European Councils and Euro Summit meetings not only illustrates and exemplifies the significant multiplication of crises which the EU has had to deal with in recent years, but also the European Council’s growing role in crisis management, especially compared to the pre-Lisbon Treaty period.

She also presented EPRS’s in-depth analysis examining the role played by the European Council and its President in managing crises, which looks at the similarities and differences in the measures agreed upon by EU Heads of State or Government when engaging in crisis management.

The paper identified a substantial degree of interconnectedness between the three crises (sovereign debt, migration and foreign policy).

The analysis also shows that no common approach has developed at the European Council level for managing crises as each crisis has different causes, management is based on a different response and is made up of specific, often unique, circumstances. However, one can still identify similar challenges the European Council faces as it goes through certain phases in responding to a crisis. These phases include: (1) a failure to anticipate the crisis; (2) a lack of existing European tools to address the crisis; (3) the search for a common European approach; (4) a shift from a short-term to a long-term strategy and (5) the use of alternative approaches.

3 thoughts on “The European Council and crisis management”