In the context of the ongoing negotiations of the Transatlantic Trade and Investment Partnership (TTIP), citizens called for the Parliament to ensure transparent negotiations and to preserve European consumer and environmental standards. In view of the NSA surveillance revelations, they expressed particular worries about data protection and questioned the benefits of the planned agreement.

Please have a look at our new EP answers on this topic, published on 14 July 2015:
TTIP: EP recommendations for an EU-US trade deal

The European Parliament is carefully and critically monitoring the negotiations for the conclusion of a Transatlantic Trade and Investment Partnership (TTIP). These negotiations with the US are ongoing, so it is still far from clear what the final content of the agreement will be. The MEPs will carefully make up their minds on this matter when the final text is on the table. In so doing, they will, of course, bear in mind the interests of Europe’s citizens. 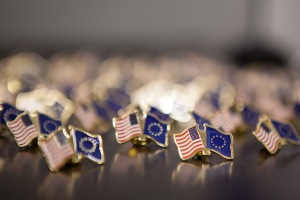 From the outset of the negotiations, the European Parliament and its President have argued for the preservation and improvement of high European standards relating to consumer protection, social rights, health, the environment and data protection. This was pointed out by Martin Schulz, President of the European Parliament, in a speech of 16 October 2013 to representatives of the American Chamber of Commerce in Brussels:

‘To be clear: the goal of the Free Trade Agreement can’t be that one side takes over the rules of the other side; nor can the goal be a race-to-the-bottom – we do not and will not end up with lower social, health or environmental protection standards.

This Agreement must mean safer consumer goods and improved public health. And the European Parliament will ensure that our citizens’ interests will be well protected and that there will be no unnecessary haste.’

President Schulz also made the following pledge: ‘We will only give our consent, which is needed for the agreement to enter into force, if we are satisfied that our citizens’ interests and the interests of the EU as a whole are safeguarded.’

But Martin Schulz also explained in this speech why he considered a transatlantic free trade agreement to be, in principle, in the interests of the EU and its citizens. He said in the context of increasing globalisation and the growing strength of new economic powers outside Europe and the USA:

‘TTIP or the Free Trade Agreement is about making sure the United States and Europe remain standard makers rather than standard takers. If we do not unite behind common standards it will soon become difficult to even up-hold our own standards.’

Before the start of negotiations, the European Parliament, in a resolution of 23 May 2013, had given its assent for the start of trade talks with the US, but also stressed European values ​​and standards which it wanted to see defended in the talks. Parliament thus referred to the EU’s precautionary principle, which should not be touched in the agreement, and pointed out ‘the sensitivity of certain fields of negotiation, such as the agricultural sector, where perceptions of Genetically Modified Organisms (GMOs), cloning and consumer health tend to diverge between the US and the EU.’

More information about Parliament’s position can be found in the press release of 23 May 2013 and in the background dossier on the free trade agreement.

Since such an agreement is based on mutual trust, Parliament will also continue to insist that the massive surveillance operation targeting European citizens conducted by the US intelligence agency, NSA, be prohibited. Parliament is thus currently investigating the surveillance allegations and working on possible countermeasures.

In a resolution of 4 July on the NSA monitoring programme, MEPs had already pointed out that the EU data protection standards should not be undermined as a result of the free trade agreement with the United States. It would be regrettable, according to the resolution, if efforts to conclude a transatlantic trade and investment agreement were undermined by the recent allegations. A press release summarises Parliament’s principal demands.

Detailed information on the TTIP negotiations can be found on a special Commission website. The Commission’s negotiating team may also be contacted by email: trade-ttip-transparency@ec.europa.eu.

In January 2014, the European Commission announced the decision to halt the negotiations on the investment provisions of a future EU-US trade deal and to consult the public about this part of the negotiations. EU Trade Commissioner Karel De Gucht explained that this decision follows unprecedented public interest in the talks and that it also reflects his determination to secure the right balance between protecting European investment interests and upholding governments’ right to regulate in the public interest. In early March 2014, he will publish a proposed EU text for the investment part of the talks which will include sections on investment protection and on investor-to-state dispute settlement, or ISDS. This draft text will be accompanied by clear explanations for the non-expert. People across the EU will then have three months to comment.

The Commission explained that no other part of the negotiations is affected by this public consultation and the TTIP negotiations will continue as planned.

We would also refer to the Commission’s fact sheet on ‘Investment Protection and Investor-to-State Dispute Settlement in EU agreements’. In it, the Commission sets out in detail, inter alia, how it wishes to prevent the misuse of investment protection provisions in new trade agreements. Moreover Ignacio Garcia Bercero, the Commission’s chief TTIP negotiator pointed out at a public hearing before the European Parliament’s Committee on International Trade on 14 October 2013, inter alia, that for areas such as chemicals, the use of genetic engineering or data protection, rules in the EU were different from those in the United States and that the level of protection in Europe should not be called into question by the TTIP.

Any questions on this issue or another EP-related concern? Please use our web form. You write, we answer.

The Citizens' Enquiries Unit provides information on the activities, powers and organisation of the European Parliament. You ask, we answer.
View all posts by Ask EP »
« Fighting food fraud
Investor-State Dispute Settlement (ISDS): State of play and prospects for reform »