Parliament’s vote on the directive on tobacco and related products spurred consumers of electronic cigarettes to write to the European Parliament. Many citizens voiced their concern about the scientific evidence on which the rules applied to e-cigarettes were based. Some ex-smokers indicated as a possible consequence of these stronger regulations that e-cigarettes consumers would start using tobacco again.

The European Parliament has not taken this decision lightly. A lot of thought has gone into the proposed rules concerning e-cigarettes. Members of the European Parliament (MEPs) have listened both to consumers and to experts in the field. On 25 February 2013 the EP Committee on Environment, Public Health and Food Safety (ENVI) held a public hearing on Tobacco Products and a public workshop on electronic cigarettes on 7 May 2013. Meeting documents and proceedings of both hearing and workshop are freely available on the EP website. 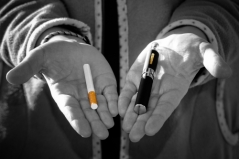 On 8 October 2013, the EP adopted its original position on the European Commission’s proposal for a new directive concerning the manufacture, presentation and sale of tobacco and related products. According to the EP resolution, e-cigarettes should have been regulated, but not been subject to the same rules as medicinal products unless they would have been presented as having curative or preventive properties. Those for which no such claims were made should have contained no more than 30mg/ml of nicotine and should have carried health warnings. Manufacturers and importers would also have had to supply the competent authorities with a list of all the ingredients that they contain. Finally, e-cigarettes would have been subject to the same advertising restrictions as tobacco products.

The negotiations with the Council of the EU were successfully concluded on 18 December 2013. Many of the EP’s original proposals concerning electronic cigarettes are still part of the compromise agreed with the Council. Changes include the lowering of the maximum nicotine concentration to 20 mg/ml and fixing the maximum size of single use cartridges at 2 ml. The final text of the agreement is available on the EP website.

The compromise reached between Parliament and Council was adopted in plenary on 26 February 2014 with 514 in favour, 86 against and 58 abstentions.

The agreement is aimed at helping smokers to quit while preventing any incentive for young people to start smoking.

Any questions on this issue or another EP-related concern? Please use our web form. You write, we answer.

The Citizens' Enquiries Unit provides information on the activities, powers and organisation of the European Parliament. You ask, we answer.
View all posts by Ask EP »
« European gastronomic heritage: cultural and educational aspects
The tsunami in Japan, three years after »