Lithuania on the way towards euro adoption

After Latvia joined the euro area at the beginning of this year, Lithuania should be the next EU country to adopt the single currency. Following consultation of the European Parliament, the Council is expected to decide in July on the European Commission’s proposal that Lithuania become the 19th member of the euro area on 1 January 2015. Some commentators suggest that this could be the last enlargement of the area for some time, since no other Member States (except for Denmark which has an “opt-out” from the single currency) are currently participating in the exchange rate mechanism, a necessary intermediate step prior to membership. 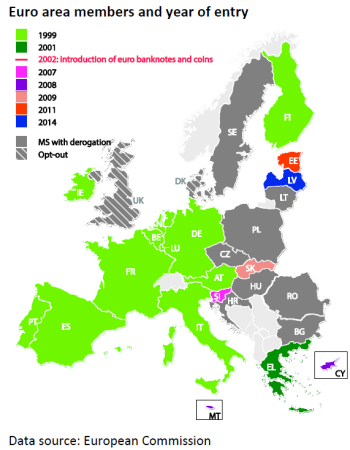 In June 2014, the European Commission (EC) and the European Central Bank (ECB) published their biannual Convergence Reports on the Member States (MS) with a derogation from adopting the euro, given that they do not yet meet at least one of the criteria established to ensure a high degree of sustainable convergence within the currency area. The EC report concludes that Lithuania now meets all the legal and economic requirements, comprising: legal compatibility with the Treaty (e.g. independence of the central bank); price stability (assessed on the basis of the inflation rate); sound and sustainable public finances (government deficit and debt as percentages of gross domestic product); durability of convergence (long-term interest rate); and exchange rate stability (deviation from a central rate). The EC also analyses factors such as the development of the balance of payments, market integration (e.g. trade, foreign direct investment and functioning of the internal market) and financial market integration (e.g. structures and trends of the financial sector and compliance with EU “acquis” in this area). Noting that challenges remain, the EC underlines the need to maintain policy discipline.

The ECB‘s assessment of the criteria is along the same lines, but the Bank adds that it will be challenging to keep the inflation rate in Lithuania low in the medium term, since its current level is mainly influenced by temporary factors such as the reduction in global commodity prices, including the effects of this on energy prices. In 2006, an inflation rate slightly above the reference value was the reason that Lithuania was not able to join the euro area then, further to a special convergence report drafted by the EC at the request of the Lithuanian authorities. In the framework of the European Semester, the 2014 country specific recommendation for Lithuania includes a point on further promoting competition and diversification of energysources through improved integration of the Baltic energy markets. Projects in the context of a broad National Energy Independence Strategy aim to tackle this and to reduce reliance on energy imports from Russia.Another point of the recommendation concerns reinforcing budgetary measures to address risks of deviation from Stability and Growth Pact requirements.

Steps from the Lithuanian litas to the euro

On the basis of its analysis, the EC has proposed that Lithuania’s derogation be abrogated in order for the country to move to the euro as of 1 January 2015. In June 2014, euro area MS agreed with the conclusions of the EC and adopted a recommendation accordingly. The European Council has also endorsed the proposal, congratulating Lithuania on achieving convergence thanks to sound economic, fiscal and financial policies. The European Parliament (EP) should give its opinion in mid-July when the plenary is due to consider the report prepared by the Economic and Monetary Affairs (ECON) Committee. Other steps on the road from the Lithuanian litas to the euro include the final Council decision on the proposal, expected by the end of July. In addition, the euro area MS and Lithuania have to fix irrevocably the conversion rate, by unanimity. Lithuania will have to implement its national changeover plan to ensure a smooth transition from the litas to the euro. A positive EC assessment of the recent experience with changeover in Latvia draws conclusions useful for future changeovers, including in Lithuania.

Some views on euro adoption after the economic crisis

According to a 2013 policy paper analysing the impact of the economic crisis on three countries (Slovakia, Estonia and Slovenia) that more or less recently adopted the single currency, a mix of factors is crucial to ensure resilience to negative external shocks of small economies in the euro area: “a sound financial sector, a stability-oriented macroeconomic policy framework, flexibility-enhancing labour market regulations and competition-friendly product market regulation”. An article published by Bruegel when Latvia was in the process of adopting the euro argued that the move presented no clear advantages for either the country or the area. Conversely, the EC considered euro adoption positive for both sides, since this confirmed the stability and attractiveness of the single currency, while strengthening Latvia’s position at the political and economic core of Europe. A 2014 paper published by Vilnius University deems euro adoption to represent for Lithuania the achievement of relative stability through the monetary policy of the ECB in the challenging context of the global economy. The central bank of Lithuania has issued an assessment of the impact of euro adoption on the national economy, concluding that benefits would be significantly higher than costs. In addition, the governors of the central banks of the Baltic States agree that euro adoption in Lithuania would benefit the entire region, with Estonia’s three-year experience in the currency area given as a positive example of how the euro allows the enhancement of economic ties with the rest of Europe. A 2014 Eurobarometer survey shows that Lithuanian citizens supporting the introduction of the euro grew to 46% (+5% from 2013), but are still slightly less than those against it (48%, i.e. -7% from 2013).

Some analysts say that one additional advantage of euro adoption is the opportunity to take part in the further shaping of the currency area as a full member from within, since economic and monetary union (EMU), the integration process that brought the euro’s creation, is deemed to be a major driver for different levels of integration within the EU. The sovereign debt crisis appears to have heightened this trend, since many of the measures that MS and EU institutions have taken to tackle it are focused on the euro area.

According to some commentators, Lithuania could be the last country to adopt the euro for some time. Exchange rate stability is assessed on a country’s participation in the European Exchange Rate Mechanism (ERM II) for two years without severe tensions. The only MS currently in the ERM II, which limits a currency’s fluctuation against the euro, are Lithuania and Denmark, and the latter has an “opt-out” from the euro.

As for future enlargements of the area, a 2013 paper published by Intereconomics argues for a new adoption strategy that has no announced target date for changeover and takes into account countercyclical policies to reduce countries’ vulnerability to external shocks. 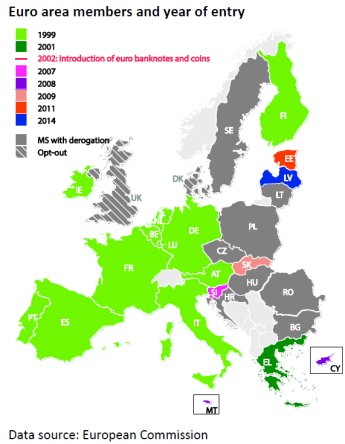 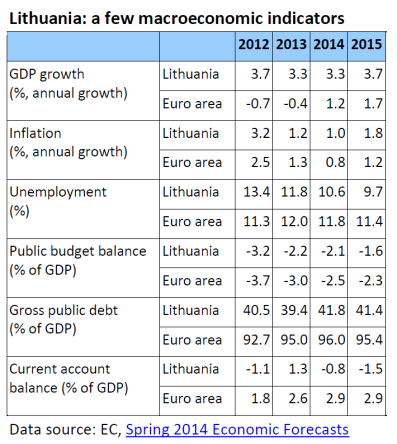