Recent anti-gypsy* incidents remind us that discrimination against Roma people, although it does not always reach the media, is widespread. An example of this discrimination is the recent incident involving football fans in Madrid, recorded humiliating six Roma women who were begging in the city centre. The video footage of this incident received wide online attention, with the governments of the Netherlands and Spain immediately condemning the behaviour of the football supporters involved. As the 2014 Pew Research Centre public opinion poll shows, a median average of around half of the population of EU Member States surveyed view Roma ‘unfavourably’.

Despite the evident lack of data available to measure progress/regression on Roma inclusion, enough research exists to indicate that a large majority of Roma people (71%) live in ‘deep poverty‘. To tackle this issue, myriad initiatives have been launched, both at the EU level and at national and local level, for instance in the areas of employment discrimination, access to housing, and poor quality healthcare. One such document is the 2011 Communication on an EU Framework for National Roma Integration Strategies by 2020, which was adopted by the European Commission with the aim of contributing to end Roma exclusion by focusing on four key subjects: employment, healthcare, housing and education. 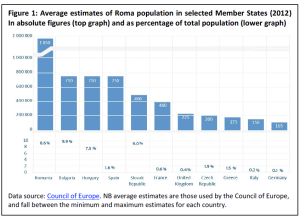 Halfway through the 10-year period (2010-2020) in which the Commission expects to see that objective become a reality, there seems to be a consensus on the slow progress to date. As a 2015 study (commissioned by the European Parliament’s Policy Department for Citizens’ Rights and Constitutional Affairs at the request of the Parliament’s Committee on Civil Liberties, Justice & Home Affairs) shows, the implementation of the goals set in the National Roma Integration Strategies (NRIS) suffers from a persistent ‘lack of political will at all levels’ of Member State administrations. In addition, ‘unrealistic, untailored targets, disconnects between factors such as reporting procedures, and funding or capacity, as well as weak evaluation procedures and the absences of sanctions for non-performance’ also hinder implementation efforts.

A briefing published by the European Centre for Minority Issues in 2015 also points to some of the main shortfalls and hurdles of the EU framework which Member States and EU institutions are trying to overcome. Some of the challenges are posed by the use of the term Roma as a one-term-fits-all, when it is not, in reality, a homogeneous group. Furthermore, there is a lack of coherence between the positions of the EU, Member States and stakeholders and also between the ‘political and empirical perspectives’ regarding ‘Roma’ inclusion.

However, amid setbacks in housing, health and employment and despite the ‘persistence of segregation of Roma children in special schools or classes’, experts show some optimism when it comes to education.

Against this backdrop, International Roma Day is commemorated every year, on 8 April, both to highlight the issues Roma people face but also, on a positive note, to celebrate Romani culture. This year will additionally mark the 45th anniversary of the First World Romani Congress.

*Although this term is used by the EP in its official documents, terms such as ‘Antiziganism’ or ‘Anti-Romanyism’, inter alia, also encapsulate this idea of Roma discrimination.

For a brief overview of the EU Roma policy framework read the EPRS At a Glance publication ‘EU policy for Roma inclusion‘.