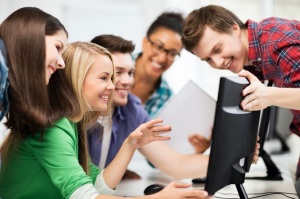 Erasmus marks its 30th anniversary in 2017. This exchange programme is now the first key action of a new umbrella programme, Erasmus+. The main celebratory event will take place at the European Parliament in Strasbourg on 13 June. Two digital initiatives will be launched during this event, the ‘Erasmus+ MobileApp’ which will help participants make the most of their mobility experience, and the ‘Erasmus+ generation online meeting point’ which will allow alumni to network and help the programme evolve.

The event will also feature the inauguration of an interactive exhibition and debates on the future of the Erasmus+ programme, and the President of the European Parliament, Antonio Tajani and the President of the European Commission, Jean-Claude Junker will address the event. However, the highlight will be an awards ceremony during the European Parliament plenary session, in which 33 Erasmus participants and alumni, one from each of the participating countries will take part, to testify to the decisive impact of participation in the different strands of Erasmus+.

The following three stories were chosen as examples of alumni from different areas of the European Union, who participated in different strands of Erasmus+.

Martina is a teacher from the Czech Republic. Martina participated in an Erasmus project in 2008 and has since taken part in a number of other initiatives. Currently, she is organising short-term teacher exchanges and job shadowing from her school in Ostrava. She believes her participation in Erasmus+ helps her students experience other cultures from their classroom, think independently, and see themselves as European citizens.

Michael, from Ireland is a youth worker. Michael participated in an exchange in 2013 and later led other youth exchanges. He believes international mobility helps to remove prejudices and opens up unexpected opportunities. He plans to study abroad and wants to establish an NGO that helps disadvantaged young people realise their potential.

Gianni from Italy went abroad to work at a global risk and disaster management consultancy. Gianni completed a PhD and invented new techniques in geospatial data analysis. He now has his own company, which has been recognised as ‘the most innovative company’ by the province of Pavia in Italy. Mobility has helped him find a career path, develop technical skills, perfect his language and presentation skills, open up to other cultures and try out different work practices.

Erasmus+ is the EU funding programme dedicated to education, training, youth and sport. Member States are solely responsible for these areas, but the EU supports cooperation, policy innovation, and cross-sectorial projects as well as mobility. The financial envelope of €14.7 billion represents 1.36 % of the 2014-2020 Multiannual Financial Framework, and Parliament follows the programme’s implementation to make sure that the money is well spent.

A resolution on the implementation of Erasmus+, adopted by the European Parliament on 2 February 2017, highlights the programme’s relevance in fostering active European citizenship, lifelong learning and better job prospects. It also acknowledges that the programme has a role in strengthening social cohesion, modernising education and training systems and promoting inclusive and sustainable growth. Parliament acknowledged that the first phase of the implementation of the new umbrella programme had been difficult, but also acknowledged that the Commission had made efforts to adjust. The resolution cites steps taken to include refugees and to foster civic values as examples. It asks that the programme be made more accessible to people with special needs and young people from disadvantaged backgrounds. Though the new version is more visible than the original Erasmus programme, the resolution suggests that the names of the different sub-programmes such as ‘Grudtvig’ and ‘Leonardo da Vinci’ are still useful. At the same time, there needs to be more cross-sectorial cooperation. Parliament also called for the strengthening of the school dimension and lamented the rejection of many deserving projects due to the marginal budgetary increase in the first stage. In the case of sport, the resolution also regretted the under-representation of organisations for amateur and disabled sportspeople. Parliament considers further budgetary increases to be necessary for the next programme generation, given the number of high quality applications. Parliament is in favour of the exemption of learning mobility from taxation and social levies, easier access for small-sized organisations and the simplification of procedures. Efforts are also needed to improve the recognition domestic institutions give to international qualifications and skills acquired during the mobility experience.