The EU and China [What Think Tanks are thinking] 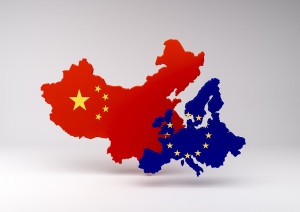 The European Union and China made limited progress towards improving bilateral ties at their summit in early June, and they remain at odds over a number of controversial trade issues. However, analysts say the EU and China look poised to strengthen cooperation on fighting climate change, especially after the new US President, Donald Trump, withdrew from the Paris deal on cutting greenhouse gas emissions. China is also eager to push ahead with its Belt and Road Initiative – a strategic plan to boost transport, trade, connectivity and cooperation between China and Europe.

This note offers links to recent commentaries, studies and reports from major international think tanks on relations between China and the EU, as well as on other issues related to the country. More studies on the topic can be found in a previous edition of ‘What Think Tanks are thinking’.

Other than climate change, can anything else unite Europe and China against Trump?
Bruegel, June 2017

China-EU leadership in globalisation: Ambition and capacity
Centre for European Policy Studies, May 2017

EU-China co-operation in global governance: Going beyond the conceptual gap
Egmont, May 2017

China cannot finance the Belt and Road alone
Bruegel, May 2017

China as an investment power in Europe
College of Europe, December 2016

Climate policy in China, the European Union and the United States: main drivers and prospects for the future
Grantham Research Institute on Climate Change and the Environment, Centre for Climate Change Economics and Policy, Bruegel, December 2016

What consequences would a post-Brexit China-UK trade deal have for the EU?
Bruegel, October 2016

China and Brexit: What’s in it for us?
European Council on Foreign Relations, September 2016

Economic diplomacy in EU–China relations: Why Europe needs its own ‘OBOR’
Clingendael, June 2016

The European Union and the China-led transformation of global economic governance
Egmont, June 2016

Europe’s mixed views on China’s One Belt, One Road initiative
Brookings Institution, May 2017

The EU in the AIIB: Taming China’s influence from within
Egmont, May 2017

China’s soft power offensive, one belt one road, and the limitations of Beijing’s soft power
Council on Foreign Relations, May 2017

The EU, the Eurasian Economic Union and One Belt, One Road: Can they work together?
Centre for European Reform, March 2017

The ‘Belt and Road’ initiative and the London market: The next steps in renminbi internationalization. Part 3: framework for policy discussion
Chatham House, January 2017

The ‘Belt and Road’ initiative and the London market: The next steps in renminbi internationalization. Part 1: the view from Beijing
Chatham House, January 2017

The ‘Belt and Road’ initiative and the London market: The next steps in renminbi internationalization. Part 2: the view from London
Chatham House, January 2017

One belt, one road: The Chinese dream and its impact on Europe
Barcelona Centre for International Affairs, May 2016

The silk road, XXI century: One belt, one road
Institute of International and European Affairs, May 2016

Xi Jinping’s long road to China’s OBOR initiative and how Europe should respond
European Centre for International Political Economy, May 2016

Transatlantic divergences in globalisation and the China factor
Centre for European Policy Studies, May 2017

China’s rising leverage is a growing risk
Bruegel, May 2017

Global competition and the rise of China
Peterson Institute for International Economics, February 2017

China and Russia: An Eastern partnership in the making?
European Union Institute for Security Studies, February 2017

China’s G20 Year and the new paradigm: Emphasis on global governance pointing the way to 2017 and beyond
Economic Policy Research Foundation of Turkey, January 2017

Should the United States recognize China as a market economy?
Peterson Institute for International Economics, December 2016

China’s global rise: Can the EU and US pursue a coordinated strategy?
Brookings Institution, October 2016

China’s advance in Latin America: Geostrategic implications for Europe, the US, and the region itself
Finnish Institute of International Affairs, August 2016

The China-Russia trade relationship and its impact on Europe
Bruegel, July 2016

China in the Middle East: Not just about oil
European Union Institute for Security Studies, July 2016