As the third-largest economic activity in the EU, tourism is a major source of economic growth, regional development and employment. Although the sector was badly affected by the recent economic crisis, tourism has proved resilient, as witnessed by the growing number of visitors to the EU. Nonetheless, the industry faces a number of challenges and mounting competition, including from emerging non-European destinations, whose share in the global tourist market is gradually increasing.

The 751 Members of the European Parliament represent EU citizens’ interests on an extremely wide range of, often complex, policy issues. To help them in their work, the European Parliamentary Research Service (EPRS) provides independent, objective and authoritative analysis of and research on these issues. As Members’ time is very limited, and the amount of analysis available sometimes overwhelming, EPRS publishes short Topical Digests of published material whenever an issue arrives at the top of the policy agenda.
In 2017 this included providing digests to coincide with High-Level Conferences organised by Parliament’s President, Antonio Tajani (EPP, Italy), on topics such as EU relations with Africa, clean energy for Europe, and tourism. A digest of analytical material was also prepared for the European Week of Regions and Cities, as well as for the Social Summit in Gothenburg. Other major issues which warranted a digest of coverage during the year include developments in EU security and counter-terrorism policies and tax avoidance and tax evasion in the wake of the Paradise and Panama papers scandals. Digests were also prepared on EU development policy, and the EU’s relations with the Western Balkans. EU policy on sport, and the EU disability strategy complete this year’s collection of handy guides to EPRS publications – designed with Members of the European Parliament in mind, but available to everybody.

Major challenges for the tourism industry and policy responses
Briefing by Vasilis Margaras, European Parliamentary Research Service, May 2017
Tourism is the third largest economic sector in the European Union. It employs an estimated total of 17 million people, and its overall contribution to the economy is close to 10 % of EU gross domestic product. This briefing outlines the various challenges the sector faces, as well as the policy responses and measures taken at EU level.

Sources of EU funding for tourism-related activities
At a glance note by Vasilis Margaras, European Parliamentary Research Service, July 2017
No specific EU fund is dedicated to tourism as such. However a number of EU funds may be harnessed in support of tourism-related activities. This note provides a short overview of the principal potential sources of EU funding for different actors, such as public bodies, companies, SMEs, research organisations, universities, non-governmental organisations, and tourism cluster initiatives.

Sustainable tourism: the environmental dimension
Briefing by Vivienne Halleux, European Parliamentary Research Service, March 2017
Tourism has a special, two-way relationship with the environment. On the one hand, the quality of the environment is essential to tourism’s success; on the other hand, tourism can create significant pressures and impacts on the environment. Potential adverse effects of tourism development relate to three main areas: strain on natural resources; pollution; and physical impacts, typically involving the degradation of ecosystems. Climate change and tourism are closely interlinked. While the tourism sector contributes to greenhouse gas emissions, for the most part derived from the transport of tourists, it also faces profound impacts from global warming.

Read this Topical digest on ‘High-level conference on tourism‘ in PDF.

Low cost air carriers and tourism
At a glance note by Ariane Debyser, European Parliamentary Research Service, July 2017
The liberalisation of air transport and the development of low-cost carriers has led to lower fares and wider access to air transport, which, in many countries, is a catalyst for tourism development. As low-cost carriers in the EU have experienced substantial growth, serving mostly short-haul destinations, they are increasingly looking into investing in the long-haul market for their future development.

Research for the EP Committee on Transport and Tourism – Health tourism in the EU: a general investigation
Study by European Parliament‘s Policy Department for Structural and Cohesion Policies, June 2017
The study defines and explores health tourism and its three main components: medical, wellness, and spa tourism. Health tourism comprises around 5 % of general tourism in the EU28 and contributes approximately 0.3 % to the EU economy. Health tourism has a much higher domestic share than general tourism does. Increasing the share of health tourism may reduce tourism seasonality, improve sustainability and labour quality, and may help to reduce health costs through prevention measures and decreased pharmaceutical consumption.

The Cost of Non Europe in the Sharing Economy: Economic, Social and Legal Challenges and Opportunities
Study by Pierre Goudin, European Parliamentary Research Service, January 2016
This ‘Cost of Non-Europe’ study examines the current economic, social and legal state of play regarding the sharing economy in the European Union, and identifies the cost of a lack of further European action in this field.

More in the Graphics Warehouse 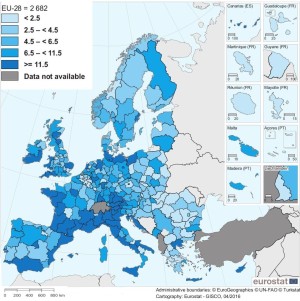