The Juncker Commission’s ten priorities: State of play in early 2018 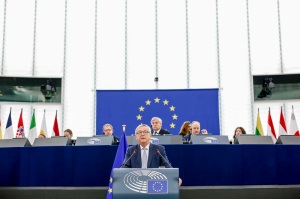 The Juncker Commission has now been in office for more than three years. With only one full calendar year to go until the end of its mandate, many consider that 2018 will be judged as ‘the year of delivery’.

What is the state of play of the various legislative and other initiatives that the European Commission has announced on, and since, taking office in 2014? How many of the commitments made have led to formal proposals so far? And how many of those proposals – whether in the form of legislation, other major political initiative, or international agreement – have been brought to fruition, so demonstrating that the EU institutions have collectively ‘delivered’?

The analysis in this paper tracks all these developments, with both a statistical breakdown and a qualitative evaluation, using a cut-off date of December 2017. It also takes stock of what the Commission has done – or not done – in response to explicit requests for action from the European Parliament.

Our analysis suggests that overall, three years after taking office, the college of Commissioners has now submitted eight in ten of the initiatives it has announced – 368 out of 460 – and that 171 of these (or 37 %) have been enacted or otherwise adopted. These global figures of course cover a variety of situations: in some priority areas, such as the digital single market, almost all of the initiatives originally announced have already been presented (94 per cent) and many adopted (41 %), whilst in others, such as energy, progress in adoption at least is somewhat slower (28 % adopted). Overall, however, evidence suggests that, step by step, the European institutions are collectively enacting the ‘Juncker plan’. They are also aware that, with little over one year to go until the next European Parliament elections, they need to show that Europe can deliver for its citizens when and where it matters. This is why, in a joint declaration on the EU’s legislative priorities signed on 14 December 2017, the three main EU institutions have set out specific initiatives and areas to which they commit to ‘give priority treatment in the legislative process … to ensure substantial progress and, where possible, delivery before the European elections of 2019’.

This study seeks to provide an independent, objective and authoritative tool for Members of the European Parliament and those interested more widely to assess the performance to date of the current Commission. It is both exhaustive – in covering all the ten priority areas the Commission set itself – and selective – as it focuses, for each priority, on the main legislative proposals or initiatives and on the latest developments. It aims to be both quantitative and qualitative: for each of the ten chapters, covering one of the ten priorities, it offers a qualitative overview prepared by the European Parliamentary Research Service’s in-house experts, complemented by a quantitative graphic providing a snapshot of the various initiatives at the key stages of their adoption. These snapshots are regularly updated on the ‘Legislative Train Schedule‘ on the European Parliament’s website.

Read this In-depth analysis on ‘The Juncker Commission’s ten priorities: State of play in early 2018‘ on the Think Tank pages of the European Parliament. 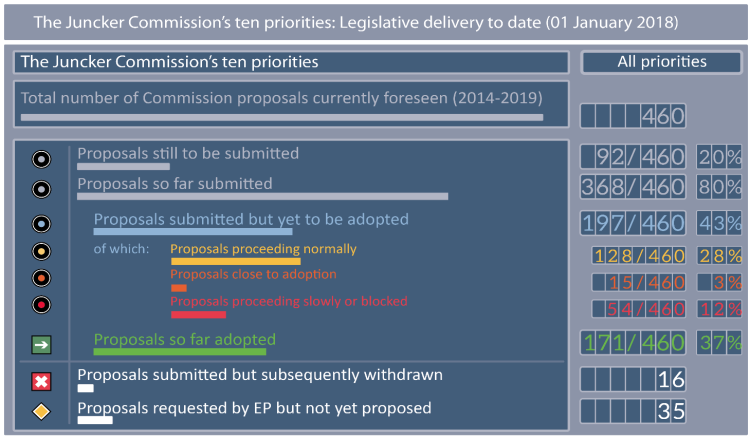 « European Agency for the operational management of large-scale IT systems in the area of freedom, security and justice (eu-LISA) [EU Legislation in Progress]
Understanding nuclear weapons and ballistic missiles »