In what is likely to be a headline-making intervention, the President of the French Republic, Emmanuel Macron, will attend Parliament’s April plenary session to participate in the latest debate on the Future of Europe on Tuesday morning. President Macron is expected to deliver a speech on his ambitions for a reinvigorated Europe, ready to face down existing and emerging challenges. The French President’s speech is likely to cover key policy areas, such as social issues, migration policy, and the future of economic and monetary union, as well as the post-2020 EU budget, perhaps also touching on the pledges made in Rome to tackle public expectations from the EU project, with a view to his ideas for consulting citizens across Europe before the European elections next year.

With international relations driving the public agenda in new and unexpected ways, on Wednesday morning, Members will hear statements from the European Council and the Commission on the outcome of the European Council meeting of 22 and 23 March 2018, at which international relations was, as ever, high on the agenda. Before that, however, on Tuesday afternoon, Members will hear about progress on drafting the UN global compacts on safe, orderly and regular migration and on refugees, with the plight of those fleeing the violence in Syria again to the fore. A statement on the situation from the Vice-President/High Representative, Federica Mogherini, will be followed by a debate on the escalation of violence including the renewed chemical attack in Syria. EU Member States, France and the United Kingdom, are currently considering joint action against the Syrian regime, and the EU has repeatedly condemned the publicly acknowledged Syrian possession of chemical weapons, which is banned by international treaty.

Terrorism remains a public concern in the EU, and Parliament will vote on a joint Economic & Monetary Affairs and Civil Liberties, Justice & Home Affairs Committee report on the prevention of the use of the financial system for the purposes of money laundering or terrorist financing on Wednesday afternoon. The proposed revision of the existing Anti-money-laundering Directive aims at modernising EU tools, to close loopholes exploited by criminals or terrorists to finance their activities. The proposals include greater cooperation between Member States, their financial authorities, and banks, to detect and report on suspicious movements of funds.

Still looking to the future, reducing greenhouse gas emissions post-2020 involves a shared effort between all EU countries. On Monday evening, Parliament will discuss two proposals to regulate effort sharing in sectors not covered by the EU emissions trading system (ETS), as well as on balancing emissions and removals from land use, such as wetlands management and forestry activities. The provisional agreements introduce greater flexibility for these sectors, provided that the target for reducing emissions is reached. Emissions concerns pushed the existing arrangements for approval and market surveillance of motor vehicles and their component parts, particularly following the 2016 Volkswagen case. On Wednesday evening, Parliament will consider proposals to strengthen national market surveillance, increasing and ensuring at least 20 % of checks are intended to reduce emissions, imposing fines for contravention, and fees upon manufacturers to cover the cost of the scheme. On Tuesday lunchtime, Parliament will also vote on whether or not to follow a Fisheries Committee recommendation to consent to the conclusion of a new protocol to the EU-Mauritius fisheries agreement. The protocol provides fishing opportunities in Mauritian waters in return for an annual contribution that seeks to support the local fisheries sector and develop the region’s ‘blue economy’. 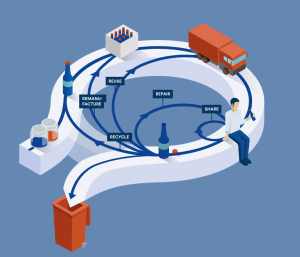 Click to see our animated infographic on Circular Economy.

Despite recent efforts to protect our environment, there is still plenty of room to improve the management of waste in the EU. On Monday evening Parliament will debate a compromise text on four proposals on waste during a joint debate on the circular economy and environmental reporting. The four texts cover the framework for the treatment of waste, landfilling, packaging, and technical waste such as old vehicles, batteries and electrical equipment. To accelerate the shift to a circular economy, changes to the proposals increase the targets for re-use and recycling, and make greater demands of the Member States in terms of waste separation and prevention.

Later on Wednesday evening, Members will discuss a Commission proposal to regulate production and labelling of organic products. The proposals aim to boost the organic market in the EU by introducing a single set of rules. The goal is to ensure that consumers can have confidence that the organic products they buy are produced with due care for animal welfare and without using non-authorised substances, and to prevent fraud.

Looking to the nearer future, next year is election year, and Parliament will vote on Tuesday lunchtime on an agreement on a proposal to amend the rules concerning the statute and funding of European political parties and European political foundations. Specifically, the changes seek greater transparency and protection of EU financial interests, including through ending the possibility for individual sponsorship of registration of a party, changing the rules on distribution of funds from the EU budget, and setting the share distributed equally between parties at 10 %, as well as lowering co-financing requirements. On Wednesday afternoon, the Council and Commission are also expected to make statements on data protection and citizens’ privacy as a line of defence against election manipulation in the light of the Cambridge Analytica and Facebook affair.

The EU’s finances are the subject of a joint debate on the decision to grant discharge for the European Commission and executive agencies‘ accounts for 2016, as well as those for the decentralised agencies and joint undertakings, and EU institutions other than the Commission  on Wednesday morning. In a total of 53 reports, the Parliament’s Budgetary Control Committee based concurs that there has been a gradual improvement in the management of EU finances, as outlined in the Court of Auditors’ 2016 report, and proposes that discharge is granted in all but two cases – the Council/European council and the European Asylum Support Office. However, the committee’s reports also make a number of recommendations on improving the legality and regularity of payments, where the margin of error could be ameliorated, and where the backlog in payments due to the delay in adopting the 2014-2020 Multiannual Financial Framework, has reached a record sum.

Gender equality has not left the headlines in recent months. A third joint debate on Monday evening is expected to consider the continued and exacerbated effects of digitalisation on gender inequalities, a recent phenomenon where women could have been expected to both contribute and be represented equally, but has instead created new risks and barriers. The debate will shine a spotlight on gender equality in the media and digital sectors and an oral question to be posed later on Monday will ask what measures the Commission is taking to empower women and girls through the digital sector.

« From Rome to Sibiu
The added value of the European Citizens’ Initiative (ECI), and its revision »