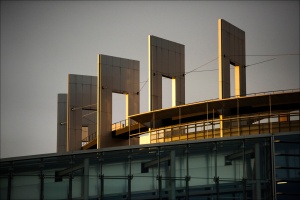 If the succession of Heads of State, leaders and other well-known personalities that continue to visit Parliament is anything to go by, the Parliament is definitely ‘the place to be’ on the diplomatic map. The second Parliamentary session in May will feature the attendance of the Prime Minister of Luxembourg, Xavier Bettel, who will contribute to the series of debates on the Future of Europe on Wednesday lunchtime. Alpha Condé, President of the Republic of Guinea, will also address Parliament on Tuesday lunchtime, and the President of the Republic of Colombia, Juan Manuel Santos Calderón, will address the plenary in a formal sitting on Wednesday lunchtime.

Over 70 % of EU fish caught in the North Sea, worth more than €850 million, are species that live close to the seabed, such as cod and haddock. Parliament is particularly concerned that fisheries measures should be taken based on the best available scientific advice, with a view to managing fishing stocks to secure the long-term sustainability of the North Sea fisheries, including joint management with third countries in the region. On Monday evening, Members will debate a provisional agreement with Council on a multi-annual plan for demersal stocks in the North Sea and the fisheries exploiting those stocks. Members will then also discuss a provisional agreement on the transposition of management, conservation and control measures applicable in the Convention Area of the South Pacific Regional Fisheries Management Organisation, making the measures applicable to EU fishing vessels that fish for jack mackerel and other species in the area, with the aim of, among other things, controlling the types of nets used, reducing seabird capture, and managing fishing that affects the sea bottom.

Also on Monday evening, Parliament will consider a report on the interpretation and implementation of the Interinstitutional Agreement on Better Law-Making, in force since 2016. Through their commitment to greater simplicity, clarity and consistency in Union legislation, and better coordination and transparency in the legislative process, the EU institutions have issued joint declarations on legislative priorities and improved access to information in the preparation of delegated acts. However, the report deems progress on other issues, such as information flow from the Council, and lack of transparency in Member States regarding their ‘gold-plating’ of EU legislation, as unsatisfactory.

On Tuesday morning, there will be statements from the Council and Commission on the Multiannual Financial Framework for 2021 to 2027 and Own Resources, for which the Commission adopted overarching proposals on 2 May, and is planning to adopt individual proposals for spending programmes during the week of the plenary session. Following that debate, Parliament will debate the agreement reached with the Council on the revision of the Posting of Workers Directive. Posting of workers is increasingly common in the internal market, particularly in the services sector, but such workers often find themselves at a disadvantage to counterparts in their host country, through being paid less and lacking legal protection. The Commission proposed revisions to the 1996 directive which currently governs the treatment of posted workers, with a view to adapting them to today’s labour market and the needs of firms while ensuring fair social protection for workers.

On Tuesday evening, Parliament will debate a recommendation for second reading of an important agreement on a Commission proposal on the protection against dumped and subsidised imports from countries not members of the EU. Modernising trade defence instruments, which allow countries to counter unfair trade practices under World Trade Organization rules, is needed to ensure Anti-Dumping and Anti-Subsidy Regulations are fit for the fast evolving global trade environment. A key issue is the proposal for partial waiver of the ‘lesser duty rule’ (LDR) for vulnerable countries, as well as the introduction of interested party status for trade unions.

Also on Tuesday evening, Members will debate a report assessing the implementation of the Victims’ Rights Directive – legislation ensuring EU-wide protection and support for victims of crime. Parliament has long supported ensuring minimum standards on the rights, support and protection of victims of crime throughout the EU, aiming at better protection against domestic violence and crimes such as stalking. However, some Member States have delayed introduction of the legislation, leading to differences in the treatment of victims.

A vote will take place on Wednesday on a proposal to amend the EU budget, aimed at providing €97 646 105 in EU Solidarity Fund assistance for Greece, Spain, France and Portugal to help their recovery from natural disasters, earthquakes, hurricanes, and catastrophic fires suffered in the course of 2017.

On Wednesday afternoon, Members will discuss EU values and the proliferation of corruption and crime through ‘golden visas’, a practice whereby some EU Member States offer citizenship and residence to persons who commit to bringing funding into their country. As these persons also automatically acquire EU citizenship in the process, concern has been expressed regarding the equity of such schemes, and their possible links to corruption and crime, as well as the effect on other Member States.

Parliament will debate a report on revising the EU legal framework on odometer manipulation in motor vehicles – or tampering with the mileage gauge in cars – on Wednesday afternoon. The practice is particularly prevalent in the very large EU second-hand car market and poses risks to consumers, who are often unaware of the fraud, and to road safety. The report proposes that hardware solutions are introduced to protect new vehicles, that mileage recordings are made mandatory, and that long-term solutions are explored, as well as making odometer fraud an offence.

A motion for a resolution is tabled for debate on Wednesday evening concerning the implementation of the Gender Action Plan, and particularly transforming the lives of girls and women through EU external relations in the development sphere, by ensuring gender equality and women’s empowerment, including within the EU institutions themselves.

« EU sanctions against Russia : What’s next?
EPRS publications for the European Youth Event 2018 »