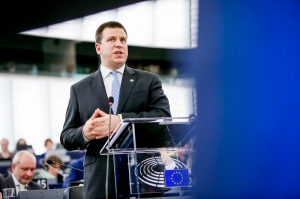 The highlight of the October I plenary session was the debate on the preparation of the European Council meeting on 18 and 19 October 2018. The series of debates on the Future of Europe continued, this time with the Prime Minister of Estonia, Jüri Ratas. Montenegro’s President, Milo Đukanović, also addressed Parliament in a formal sitting. Parliament adopted, inter alia, legislative proposals on: audiovisual media services; VAT rules; strengthening the EU Agency for Criminal Justice Cooperation (Eurojust); mutual recognition of freezing and confiscation of criminal assets; the free flow of non-personal data within the EU; health technology assessment; and emission performance standards for new passenger cars and light commercial vehicles. Parliament also voted its public procurement package, as well as a report on an amending budget regarding changes to pre-accession aid to Turkey.

Preparation of the European Council on 18 and 19 October 2018

Members made two main demands during the debate in advance of the European Council meeting on 18 and 19 October 2018: that EU leaders take significant steps on migration policy and reform of the European asylum system; and maintain a common position towards the United Kingdom while trying to reach an agreement on its withdrawal from the EU. In the migration context, the leaders will discuss a progress report at this European Council meeting, as agreed in their conclusions of June. Conclusions will also be adopted on internal security, resuming the discussions begun during the informal meeting and Leaders’ thematic debate held in Salzburg on 20 September 2018. Finally, on the margins of the session, a European Council (Article 50) meeting will take place, during which the 27 EU leaders are expected to review the overall state of the Brexit negotiations.

Montenegro’s President, Milo Đukanović, addressed the European Parliament, noting that the referendum in the former Yugoslav Republic of Macedonia held on 30 September, while largely supportive of the proposed change to the country’s name, had elicited a low voter turnout. President Đukanović called for a change in EU policy towards the Balkans, and stated that greater preparation for the referendum would have helped citizens to better understand the importance of this decision for their country’s future.

President Đukanović also spoke about the progress his own country has made, becoming independent in 2006, and a member of NATO since 2017. With 31 of 33 negotiation chapters open, Montenegro is currently ahead of other EU membership candidates in the accession process.

Statements on UNRWA, Yemen and the UN instrument on corporations

Members debated with Commissioners Christos Stylianides and Johannes Hahn on the issue of the EU’s input to a United Nations Binding Instrument on transnational corporations with respect to human rights, as well as the situation in Yemen, and EU support for the UN agency for Palestinian refugees, UNRWA, following the United States’ withdrawal of financial support. With the exception of this last item, these statements were followed by a vote on EP resolutions. During the debate on UNRWA, several Members called upon the US to cancel its decision to cease contributions to UNRWA, and the Commissioner for European Neighbourhood Policy and Enlargement Negotiations, Johannes Hahn, reiterated the EU’s political and financial support for the agency.

Following the recommendations of the Committee on Culture and Education, Parliament voted to adopt its position on the proposals for a revised Audiovisual Media Services Directive (452 votes for, 132 against and 65 abstentions), based on an agreement reached in trilogue on 26 April. It is now up to the Council to approve the new directive so that it can become law. The new rules will then apply 21 months after the directive enters into force. It should be noted that the agreed text includes better protection for children against harmful content, restrictions on advertising, and the application of new rules to video on demand and online video sharing.

Two reports on value added tax (VAT), where Parliament is only consulted, were debated and adopted, together with a third report on the application of the reverse charge and quick reaction mechanisms, seeking to update the VAT framework (which dates back to the 1960s), and take steps towards a definitive EU VAT system. Following several years of negotiations, the three texts in question were agreed between the Member States at the Ecofin Council on 2 October 2018. The first proposal concerns the harmonisation of VAT rates, which can distort the single market when, because of VAT charges, goods are more expensive in one country than in a neighbouring EU state. Countries would still be able to apply some VAT reductions in certain circumstances, and some goods would be exempted, but the proposed minimum would be 12 % to 15 %, with Parliament suggesting a maximum of 25 %. An EU VAT web information portal would also be set up to provide information on EU VAT rates, and Parliament expects the benefits of reduced rates to be transferred to consumers. The second proposal concerns the proposed VAT regime for cross-border trade; which aims to tackle VAT fraud, as well as simplifying the rules for e-commerce and for SMEs.

The agreed text on the proposal to reinforce and enhance the role of the EU Agency for Criminal Justice Cooperation (Eurojust) was debated and adopted. This EU agency has seen its activities – in fighting terrorism, cybercrime, migrant smuggling and trafficking in human beings – escalate in recent years. Parliament is ready to support its increased workload through a new governance model, now that the equally necessary and connected function of the European Public Prosecutor’s Office has been decided.

Parliament also voted in favour of a new regulation, also agreed with the Council in trilogue, aimed at improving the legal framework governing the freezing and confiscation of criminal assets in cross-border cases. The new regulation would improve mutual recognition in criminal matters in the EU, as well as the procedures recognising, freezing and confiscating criminal gains. Importantly, the proposals also prioritise the victims of such crime and their rights to compensation and restitution.

Free flow of non-personal data in the European Union

Members debated and adopted a text agreed in trilogue on the free flow of non-personal data within the EU, aiming at allowing businesses to stock and process non-personal data (personal data, meaning that which can identify an individual, are already covered by the General Data Protection Regulation, GDPR), anywhere in the EU without unjustified restriction (except for public security). The proposal enables data such as accounting and financial information to flow across borders in the EU, giving companies more choice in the location of their data services.

Amending budget No 5/2018: support to Turkey from IPA and reinforcement of ENI and of Humanitarian Aid

Parliament decided to cut the amount of pre-accession aid to Turkey in 2018 by €70 million. In its adoption (544 votes to 28 and 74 abstentions) of the report on draft amending budget No 5/2018, the EP expresses concern at the ongoing deterioration of fundamental rights and liberties and the rule of law in Turkey. Instead, Parliament chose to reinforce, in commitment appropriations, the European Neighbourhood Instrument (ENI) to fund additional actions linked to the Central Mediterranean migratory route, as well as reinforcing, in payment appropriations, the funding available for humanitarian aid.

Two Economic and Monetary Affairs Committee (ECON) decisions to enter into interinstitutional (trilogue) negotiations were confirmed. The ECON committee may therefore begin negotiations in view of preparing reports on the proposal for a directive and for a regulation on the prudential supervision of investment firms.

Read this ‘At a glance’ note on ‘Plenary round-up – Strasbourg, October I 2018‘ on the Think Tank pages of the European Parliament.

« EPRS at the European Week of Regions and Cities – empowering through knowledge
Public opinion and the EU budget – Who supports the EU budget? »