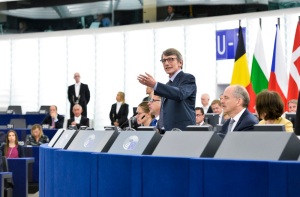 The first parliamentary session of the ninth legislature took place in Strasbourg from 2-4 July 2019. The Members of this new Parliament (sitting from 2019 to 2024), dealt with elections of their peers to the most important offices in Parliament – the President, Vice-Presidents and Quaestors. Under Rule 14 of Parliament’s Rules of Procedure, the outgoing President opened this first, constituent session, during which Members also adopted a decision on the numerical strength of the standing committees and debated the outcome of the European Council meeting of 20 and 21 June 2019, and the follow-up meeting earlier this week.

Election of the President of the European Parliament

In a secret ballot that ran to two rounds (under Rule 16 of the Rules of Procedure), the newly elected Members first voted on a field of candidates, put forward by the political groups (or individual Members amounting to 1/20th of the whole Parliament), for the position of President. David‑Maria Sassoli (S&D, Italy) was elected for the next two and a half years, by 345 votes, out of the 667 valid votes cast.

In three rounds of voting, Members then elected 14 Vice-Presidents. The Vice-Presidents, who also serve for a two-and-a-half year term, chair debates when the President cannot, and each Vice-President is responsible for specific aspects of parliamentary business.

Parliament adopted a decision, tabled by the Conference of Presidents (of the political groups) under Rule 206, concerning the numerical strength of the standing committees, i.e. the number of Members to sit on each of Parliament’s 20 standing committees and 2 sub-committees. Following that vote, the nominations of individual members to committees were announced. The committees will hold their constituent meetings next week, during which they will elect their chairs and vice-chairs. These appointments are generally the subject of an informal accord among the political groups, based on the d’Hondt method, with an eye to reflecting the plurality of Member States and a fair representation of political views. Among the first issues to be dealt with by the new committees will be to consider their approach to ‘unfinished business‘ from last term. The IMCO and REGI committees are likely to hold hearings this month, for the replacements of the two Commissioners that have taken up seats in Parliament following the elections: Andrus Ansip (digital single market) and Corina Creţu (regional policy).

Members elected Parliament’s five Quaestors, who are responsible for any administrative and financial matters that directly concern Members and their working conditions, by acclamation, since there were only five nominations. Together with the President and Vice-Presidents, the Quaestors complete Parliament’s Bureau, in which they participate in an advisory capacity.

Members debated the outcome of the European Council and Euro Summit meetings on 20-21 June 2019, at which leaders adopted the Strategic Agenda for 2019 to 2024, setting four priority areas for EU action. They also discussed appointments to high-level EU positions and finally agreed to elect, nominate or propose candidates for high-level EU positions (Presidents of the European Council, European Central Bank, and European Commission, and the High Representative for Foreign Affairs and Security Policy), during a further meeting between 30 June and 2 July. Parliament is due to vote on the candidate for Commission President, Ursula von der Leyen, at the next plenary sitting, from 15 to 18 July 2019

« Staffing arrangements of Members of the European Parliament
Human rights in EU trade agreements: The human rights clause and its application [Policy Podcast] »