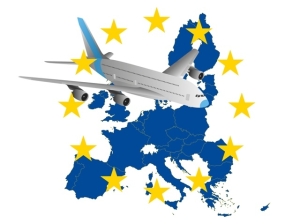 The liberalisation of the EU’s aviation market in 1993 has made air transport more accessible and affordable, with an obvious impact on growth in air services. Since then, air traffic in the EU has already increased by 54%, and according to recent figures, it is expected to grow 50% by 2030. In order to improve the overall efficiency of the way in which European airspace is organised and managed, the European Commission launched in 2004 the Single European Sky I (SES I) package, followed in 2009 by the Single European Sky II (SES II). Nevertheless, the initiative is currently experiencing significant delays in its implementation, notably the insufficient efficiency of Air Navigation and the EU Air Traffic Management (ATM) system still fragmented. In the US, for example, the en-route airspace is controlled by a single service provider as opposed to 38 en-route service providers in Europe. The lack of efficient SES creates extra costs of around €5 billion a year and has a negative impact on aviation’s carbon emissions. To tackle these difficulties and speed up the implementation of SES II, on 11 June 2013 the European Commission has launched the updating of the SES legal framework, known under the abbreviation of SES 2+ package. The package proposes to merge the four SES regulations into a single one (Proposal for a REGULATION OF THE EUROPEAN PARLIAMENT AND OF THE COUNCIL on the implementation of the Single European Sky (recast) /* COM/2013/0410), structured into relevant key areas: National authorities; Performance and charging schemes: Functional Airspace Blocks (FAB); Support services; and Network Management. The ultimate objective of the recast is the improvement of air traffic services efficiency and of air traffic management capacity. Once fully implemented, the Single European Sky will ensure a seamless, safe and modern air transport system, with benefits for environment, aviation industry and passengers.

This dossier provides recent documentation on state of play and ongoing issues concerning the achievement of the Single European Sky.

Organization and Innovation in Air Traffic Control / Reason Foundation, 2014, 59 p.
This report presents a brief introduction to air traffic control procedures and technologies, followed by an overview of how advanced ATM would improve the current control system. The analysis is completed by seven case studies of air traffic innovations that have been implemented, with varying degrees of success, in the United States and abroad.

Single European Sky (SES II+) / cepPolicyBrief No. 2013-48, November 2013,  4 p.
The CEP analisys concludes that the creation of the Single European Sky (SES) will reduce the price of air traffic services and that the extension of the Network Manager’s duties is essential for the creation of the SES. Furthermore, in view of the requirement for legal certainty, it suggests to clarify the concept of an “integrated” provision of air traffic services.

Report on the SES Legislation Implementation / EUROCONTROL, 2012, 208 p.
This report has been produced by EUROCONTROL upon the request of the European Commission’s DG-MOVE. It provides a comprehensive overview on the level of compliance with the SES legislation in the 27 EU Member States plus Switzerland and Norway (referred to as the “29 States”), Iceland and five of the ECAA parties (Albania, Bosnia and Herzegovina, Croatia, Montenegro and Serbia). It also includes 113 recommendations. The vast majority are aimed at specific States and relate to actions that have already been successfully achieved by the majority of reporting States.

AEA calls on the European Parliament to push for the implementation of Single European Sky, as they are negatively impacted by the lack of SES achievements, October 2013

Press release Action Day has been set up for January 29!

A Step Toward the Single European Sky, June 2013
IATA raised three main concerns on the new performance review body; the clearer role definition and enhanced capabilities of aviation authorities; and the changing of the definition of Functional Airspace Block (FAB) to ‘an industrial partnership’.

ETF demands a social dimension inside the Single European Sky, October 2013
The organisation calls on the European Parliament to block the liberalisation of the ATM industry.

European Air Traffic in 2035 / EUROCONTROL, 2013, 64 p.
This study explores the traffic development in Europe over the next 20 years. This document is completed by other reports of the Series “Challenges of Growth 2013“.

SESAR
SESAR (Single European Sky Air Traffic Management Research system) programme aims at researching the technology required for the future Single Sky. On July 2013 the European Commission announced €600 million of new funding from the Horizon 2020 programme; SESAR is also co-funded by the European Eurocontrol and the aviation industry. The SESAR Joint Undertaking is the legal entity responsible for the programme management.

One thought on “Time to deliver the Single European Sky: SES 2+”