The Sixth Report on Economic, Social and Territorial Cohesion 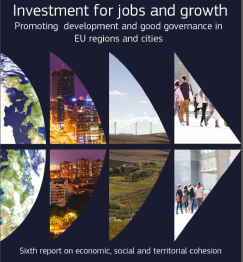 EU Cohesion Policy investments from 2014-2020 will make more than €38 billion available to support the shift to a more environmentally-friendly economy, through investments for energy efficiency and renewable energy, while up to €33 billion will support Europe’s SMEs to become more competitive.

The Report analyses the state of cohesion of the Union and highlights the challenges faced by national, regional and local authorities in overcoming the impact of the financial and economic crisis. In particular it finds that Cohesion Policy has cushioned the dramatic decline of public investment, injecting much needed investment resources in many Member States and creating vital financial stability which serves to attract private investment.

This Keysource provides a selection of relevant documents on the Sixth Report on Economic, Social and Territorial Cohesion.

Investment for jobs and growth: promoting economic, social and territorial cohesion in the Union, 2014/2245(INI) – Procedure file from Legislative Observatory

This report shows that EU Cohesion Policy is delivering on the growth goals of the Europe 2020 Strategy by creating jobs and reducing disparities across Europe. Looking ahead to 2014-2020, the report outlines how investments will be focused on key areas like energy efficiency, employment, social inclusion and SMEs to get the most of the investments to the benefit of citizens.

This webpage provides videos and speeches of the debates during this two days forum.

Council of the European Union

In its conclusions, the Council calls upon the Commission and the Member States to ensure full commitment to implement cohesion policy as reformed for the 2014-2020 period, ensuring consistency with the adopted provisions, and to avoid additional obligations or burdensome application of the rules; stresses that the new programming exercise needs to ensure the quality of the interventions and the compliance with the relevant country-specific recommendations as well as with the ex-ante conditionalities; and recalls the supportive role that cohesion policy can play in promoting important reforms, and removing long-term bottlenecks, and the reinforced link between cohesion policy and economic governance.

Meeting of Directors General responsible for Territorial Cohesion and Urban Development: Synthesis of the debate / Italian Presidency of the Council of the European Union Milan, 25 September 2014, 4 p.

Opinion on the Sixth Report on economic, social and territorial cohesion: investment for jobs and growth, ECO/370 , 21 January 2015, 9 p.

This Policy Paper on the Commission’s Sixth Report on Cohesion seeks to highlight the changes that have occurred in the development of regions since the crisis. It focuses on the role that Cohesion Policy has played in this context, helping to mitigate the effects while continuing to support economic and social cohesion. It also sheds particular light on the issue of the governance of regions and its relationship with the implementation of Cohesion Policy, especially with regard to its effectiveness. To conclude it points out the links between the implementation of Cohesion Policy and the EU’s economic and fiscal governance that the effects of the crisis tended to strengthen and new provisions for the 2014-2020 period that take them into account to a great extent.

The author argues that the post-crisis solidarity and cohesion agenda in the EU must focus on restarting the convergence process. The basic objective will be to restore the level-playing field in the Union by completing the EMU with a robust fiscal pillar and elements of a “transfer union”. On the one side, increasing investment to raise aggregate demand is the most pressing task. The other side of the bargain has to do with improving macroeconomic performance, increasing competitiveness and completing structural reforms in the vulnerable countries, for example through labour market reforms, improvements of the institutional and financial infrastructure or the sophistication of business models, altogether combining the objectives of fiscal consolidation with those of growth and equity. (Source: EPC website)

Prospects for Cohesion Policy in 2014-20 and Beyond: Progress with Programming and Reflections on the Future / by Carlos Mendez and John Bachtler, European Policy Research Paper, No. 88, European Policies Research Centre, January 2015, 49 p.

“This paper begins by setting out the recent economic, political and institutional developments at EU level with a bearing on Cohesion policy (Section 2). Section 3 reviews the finalisation of the 2014-20 legislative framework and changes in geographical eligibility and allocations, followed by an overview of the state-of-play of programming, the key issues in the negotiations between the Commission and Member States and the expected shifts in thematic allocations across the EU. Looking forward, section 4 summarises recent studies exploring post-2020 reform scenarios. The final section concludes by reflecting on some of the key implications of the 2013 reform and questions that will inform the debate on the future of Cohesion policy.” (Source: the paper)

This report presents the OECD analytical framework for measuring well-being at the regional level, as well as internationally comparable indicators on 9 well-being dimensions for 362 regions across 34 OECD countries. It also sets out guidance for all levels of government in using well-being measures to better target policies at the specific needs of different communities. Drawing on a variety of practical experiences from OECD regions and cities, the report discusses methodological and political solutions for selecting regional well-being outcome indicators, monitoring the progress of regional well-being performance over time, and implementing a process of multi-stakeholder engagement to promote social change.

Project generation and selection in Cohesion policy in 2014-20: between results-orientation and micro-management / by Frederike Gross and Laura Polverari, IQ-Net Thematic Paper, no 34(2), European Policies Research Centre, 27 May 2014, 44 p.

Evaluation of the main achievements of Cohesion Policy programmes and projects over the longer term in 15 selected regions: from 1989-1993 programme period to the present [2013] / EPRC- European Policies Research Centre and LSE – London School of Economics, 13 September 2013, 157 p.

This paper emphasis that well-performing cities and metropolitan areas are crucial not just for the local, regional and national level, but for Europe as a whole. Their performance is critical to Europe’s global competitiveness and to a new start for the EU. EUROCITIES have identified five focus areas that to a large extent align with the EU’s strategic priorities and provide a strong strategic operational framework for EUROCITIES, namely: cities as drivers of quality jobs and sustainable growth; inclusive, diverse and creative cities; Green, free-flowing and healthy cities; smarter cities; and urban innovation and governance in cities.

This note concentrates on a number of key issues raised by the 6th Cohesion Report. Among others the CPMR does not fully support the idea that the ex-ante conditions and result indicators, will contribute to ensuring better results for European investment; consider that regional GDP does not accurately reflect the challenges faced by the regions. The CPMR also regrets that the European Commission’s report is based mainly on the principle that cohesion policy intervention should now be more geared towards correcting “human-influenced factors” and less towards geographical disadvantages.

The Eurostat regional yearbook 2014 gives a detailed picture relating to a broad range of statistical topics across the regions of the Member States of the European Union (EU), as well as the regions of EFTA and candidate countries. These regional indicators are presented for the following 11 subjects: population, health, education, the labour market, the economy, structural business statistics, research and innovation, the information society, tourism, transport, and agriculture. In addition, four special focus chapters are included in this edition: these look at the environment, land cover and land use, European cities, and regional competitiveness.

This publication provides a statistical overview of living conditions in Europe. It presents a broad range of indicators on different aspects of both living conditions and the distinct socio-economic factors that affect them. These include poverty and inequality; living standards and their affordability for households; quality of housing and the living environment, as well as other material living conditions, along with their interrelationships with the social, labour and health status of a household; and aspects of child poverty and social exclusion, as well as the family-related factors in childhood which affect the situation of today’s adults.

« Greece and the euro area: What next after the Greek election? [What Think Tanks are thinking]
The post-2015 development agenda »