The gender dimension of human trafficking 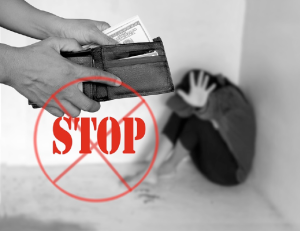 Human trafficking is a serious crime and a violation of human rights. It is on the rise due to increasing mobility, the development of new technologies and the generally low risks and high profit involved. Data on the prevalence of this crime show that the majority of its victims are women and girls. Sexual exploitation is by far the first purpose of trafficking in women. Most trafficked women are forced into commercial sexual services while many are also victims of domestic servitude.

There are several factors which contribute to trafficking in women. Their vulnerability, especially as a consequence of violence, and the demand for their sexual services are two leading factors which have received increased attention in recent years. Tackling this demand requires addressing prostitution. EU Member States have adopted different approaches to this phenomenon, ranging from criminalisation of all activities related to prostitution to regulation.

Traffickers operate via various channels of recruitment which involve coercion, force or deception. They usually exploit the poor economic situation of women searching for a better life abroad. The internet and new technologies play an important role, as does migrant smuggling.

The EU has adopted key instruments to tackle trafficking in human beings. They are based on a victim-centred approach and recognise that support and protection of victims, as well as prevention should be gender-specific. The European Parliament plays an important part in shaping EU policies in the field.

Read the complete Briefing on ‘The gender dimension of human trafficking‘ in PDF. 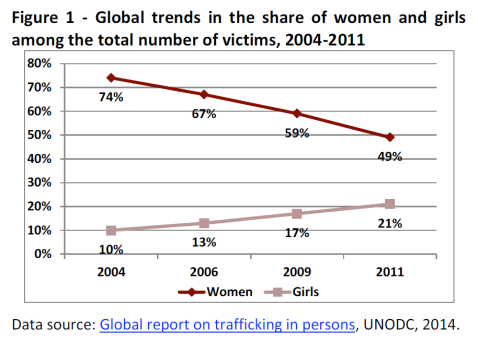 Global trends in the share of women and girls among the total number of victims, 2004-2011 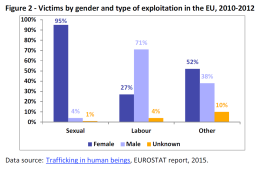 « The Employment Equality Directive – European Implementation Assessment
The Cost of Non-Europe in the Sharing Economy: Economic, Social and Legal Challenges and Opportunities »