Differentiated integration in the European Union

As the number of European Union Member States has increased and the competences of the Union have widened, some Member States have on occasion been exempted from joining their partners in new fields of integration. Whilst the single market and its ‘four freedoms’ remain at the heart of the Union, it has found ways to allow the majority to move forward, notably in the fields of Economic and Monetary Union and Justice and Home Affairs, without all Member States taking part.

The graphics below illustrate the differing arrangements for Member States’ participation in EMU and JHA. This is variously known as differentiated integration, variable geometry, multi-speed or à la carte Europe. Even if some see the current situation of the United Kingdom as further entrenching the practice, the Union has always maintained the possibility for non-participating Member States to re-join their partners. Furthermore, new Member States do not immediately participate fully in certain policy areas, such as the euro area. 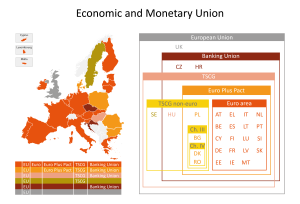 Although all 28 Member States participate in the Economic and Monetary Union (EMU) to some degree, at its heart is the euro area – from the initial 11 at the launch of the new currency in 1999, it has grown to 19 countries today. All but two of the remaining Member States (Denmark and the United Kingdom) are formally committed to steering their economies towards joining the euro area, meeting the convergence criteria required. Whilst the monetary side of EMU was strong from the outset, the economic dimension has seen major developments in recent years. In particular, putting in place tools for ‘economic governance’, and strengthening the EU’s instruments for fiscal surveillance through the Stability and Growth Pact was seen as essential in the wake of the economic crisis.

The euro-area Member States established the European Stability Mechanism (ESM) in 2012 as an instrument to provide financial assistance and loans for resolving crises in public finances. At the same time, Member States sought to develop further coordination in the area of economic policies, through the voluntary Euro Plus Pact. Like its binding successor, the intergovernmental Treaty on Stability, Coordination and Governance (TSCG or ‘Fiscal Compact’), it was opened to Member States beyond the euro area. The TSCG includes provisions on economic policy coordination (chapter IV) and imposes limits on government’ budget deficits and public debt (chapter III), but Member States outside the euro area can choose whether to be bound by those two chapters. Most recently, the development of a Banking Union, including tools for bank resolution, has made the European Central Bank the ultimate regulator of banks within the euro area. Again, Member States outside the euro area may choose to participate in the Banking Union. Thus all but two Member States have signed the intergovernmental agreement which creates a common resolution fund to deal with bank failures which threaten the stability of the financial system.

Download this publication on ‘Differentiated integration in the European Union‘ in PDF.

From 1995 on, the development of the Schengen area has made cross-border travel with no formalities the norm for much of Europe. Schengen members rely on each other to manage the external borders of the area, including through the issue of visas to third-country nationals, and have developed a range of tools to share information among immigration and law enforcement agencies. Apart from the UK and Ireland, the Schengen area should extend to all EU Member States; those that have yet to be integrated have to comply with certain conditions in border management and law enforcement cooperation before they can join. The Schengen area extends also to the associated Nordic countries plus Switzerland and Liechtenstein.

Area of Freedom, Security and Justice

Three Member States have specific arrangements in respect of EU policies in this area, covering border checks, asylum and immigration, and police and judicial cooperation in civil and criminal matters. Ireland and the UK are not automatically bound by any legislation in this field, but may choose to opt in to such acts either before or after their adoption. Denmark is not bound by any legislation in this field, but after its adoption may seek to participate by means of a complementary agreement. The table shows a number of key legal acts in this field, with the participation status of the three Member States. 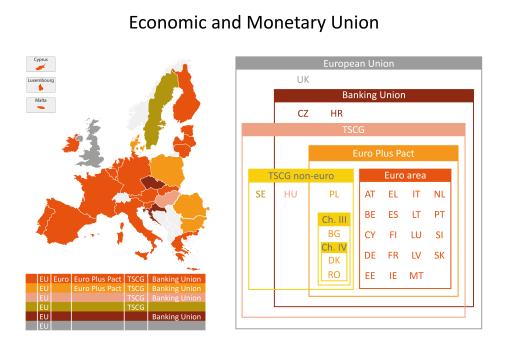 « The United Kingdom and the European Union [What Think Tanks are Thinking]
Article 50 TEU: Withdrawal of a Member State from the EU »