How the EU budget is spent: The European Regional Development Fund 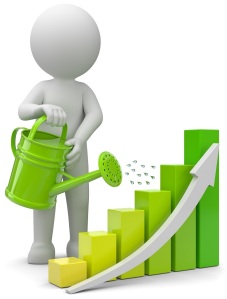 The European Regional Development Fund (ERDF) is one of five European Structural and Investment (ESI) Funds aimed at achieving economic, social and territorial cohesion in the European Union. The ERDF’s primary task is to redress the main regional imbalances in the Union through investment in the structural adjustment of regions where development is lagging behind. Moreover, the Fund supports the economic conversion of declining industrial regions. The ERDF budget for the 2014-2020 period amounts to €196 billion, this is 43.2 % of the total allocation for the ESI Funds and more than 18 % of the total MFF. In the 2014-2020 programming period the biggest ERDF recipient is Poland, with an allocation twice that of the second on the list, Italy. Estonia, Slovakia and Latvia receive the highest ERDF support per capita.

Although the ERDF’s principal goal has remained almost the same since the Fund was created in 1975, the management modes and the types of co-financed investment have significantly changed to reflect cohesion policy reforms and new EU priorities. In addition to its important role as a cohesion policy toll, over the years the Fund has also become one of the financial means to achieve the common EU goals defined in the Europe 2020 strategy. Consequently, in the current programming period, about 95 % of ERDF resources is spent on investment for growth and jobs in three types of regions classified on the basis of their GDP per capita (less developed, more developed and transition regions). The remaining 5 % of the ERDF supports European territorial cooperation, i.e. numerous cross-border, transnational and interregional co-operation programmes, formerly known as Interreg.

The ERDF’s priorities have shifted from ‘hard’ infrastructure to investment in technology and innovation-related projects. In the 2014-2020 period more than half of the ERDF resources will support the following four priorities:

Over more than 40 years of operations, the ERDF has supported multiple objectives, types of investment, and beneficiaries in all EU Member States. Together with the Cohesion Fund, the ERDF accounts for a substantial proportion of public investment in the Member States, especially in the poorest regions of the EU. According to the evaluation reports, the ERDF’s impact, especially with regard to development of transport and environment infrastructure, as well as support for SMEs, is considered both positive and significant.

Read the complete briefing on ‘How the EU budget is spent: The European Regional Development Fund‘. 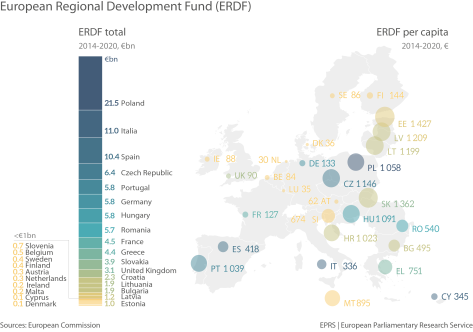 The European Structural and Investment Funds