Implementing the EU global strategy: who, what and how? 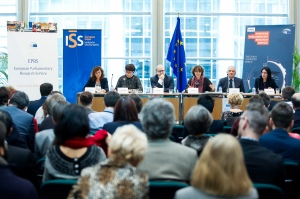 The EU global strategy, presented by High Representative Federica Mogherini in June 2016, aims to give the European Union a collective sense of direction in dealing with external challenges like the conflict in Syria, sanctions on Russia, fragility across Africa, or the fight against terrorism and hybrid threats. However, the 28 EU Member States do not always agree on this journey: while some wish to move faster and take shortcuts, others prefer a cautious approach, or sometimes follow a completely different path. The EU’s own institutional arrangement is not always conducive to cooperation either – with a ‘silo’ mentality and competition for resources still prevailing in some of the policy areas.

These and many other issues were addressed during the EPRS roundtable entitled ‘The EU global strategy: From vision to action‘, organised in cooperation with the EU Institute for Security Studies. Members of the European Parliament – Elmar Brok (chairman of the Foreign Affairs Committee (AFET), Sandra Kalniete (rapporteur for the EP resolution on the EU in a changing global environment), and Urmas Paet (rapporteur for the AFET own-initiative report on the European Defence Union) – shared their experiences of their parliamentary work on these highly complex files. A keynote address delivered by Antonio Missiroli, Director of the EU Institute for Security Studies in Paris (EUISS), and comments by Director Gabor Iklody (Crisis Management and Planning Directorate at the European External Action Service), complemented the MEPs speeches to give a full picture of the current situation.

One of the main issues that emerged in the discussion concerned the definition of EU strategic autonomy, as proposed in the global strategy. Antonio Missiroli noted that an appropriate level of strategic autonomy is not an abstract and absolute idea, but rather a call to define what the EU should be able to achieve in responding to contingencies that could affect our common interests and shared principles. While the preference is to work with partners, he commented that the EU needs to be prepared to act autonomously, if required. Sandra Kalniete stressed the importance of the debate on strategic autonomy, especially in the context of a weakening transatlantic link and a possible United States’ disengagement from the European Union, which might in turn imply a lesser commitment to collective defence under the NATO framework. In a similar vein, Urmas Paet noted that one way to achieve strategic autonomy is by making better use of the existing provisions in the Lisbon Treaty, by simultaneously providing them with content that is more practical. In his view, such concrete measures could include: a commitment to spending 2 % of GDP on defence; redefinition of the concept of battle groups; better use of funds for civilian assistance when NATO is providing military support; and a ‘military Schengen’ that would facilitate the movement of troops around Europe and their subsequent deployment. With regard to capacity building support for the military, Gabor Iklody stressed the existing difficulties to provide EU funding for such activities, as well as the need to bring the development and defence communities together. 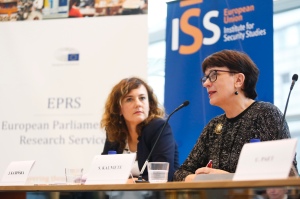 Based on her experience with the European Parliament resolution on the EU global strategy, Sandra Kalniete noted that the mood is evolving with regard to many of these issues, including in the European Parliament. Some of the issues which were politically contagious in the past, or what she referred to as ‘red flashes’, have received support from the majority of Members of the European Parliament this time around, including on the commitment to spend 2 % GDP on defence, the vital importance of EU-NATO cooperation, or the need for a strong European pillar within NATO. She explained this ‘mood swing’ by the Parliament’s eventual recognition that hard power matters. Recognising that there is no contradiction between hard and soft power, she stressed the importance of the former to ensure an effective deployment of the latter. This observation was reiterated by Elmar Brok, who used the EU’s absence from the political negotiations over the situation in Syria as an example of how significant resources committed to a conflict (i.e. humanitarian, development, etc.) are of limited political value if they are not backed up by military capabilities.

Another focus of the discussion was the dissonance between citizens and policymakers with regard to the importance of closer cooperation in the field of security and defence. According to Antonio Missiroli, it is undeniable that security and defence is the priority on the EU agenda which corresponds to the strongest demand for more cooperation on the part of EU citizens. However, he also highlighted the existing paradox: while the public understands the value of cooperation and supports closer European cooperation on defence, the governments in Member States often claim that security is provided more effectively at national level. Therefore, citizens appear to understand much better the benefits of cooperation: efficiency and effectiveness, synergy and solidarity. Antonio Missiroli further observed that there is hardly a single security challenge in the world that is better addressed and resolved with less cooperation.

Speaking about the challenges to implementing the global strategy, Urmas Paet pointed to the lack of clarity in the distribution of specific responsibilities between Member States and EU institutions. He highlighted the fact that, despite the creation of the European External Action Service, the EU still does not have a ‘single phone number’ for dealing with foreign and security policy. Instead, policies are designed and implemented in silos by groups of Member States, which in turn undermines a common European approach, the EU’s credibility in relations with third countries and, as a consequence, their willingness to engage with the EU on foreign and security policy issues. Such behaviour, he further argued, leads to confusion among citizens, who are constantly exposed to national governments’ criticism of the EU, when these same governments take these decisions in the Council. This final observation was strengthened in Elmar Brok’s concluding remarks, stressing that no Member State has impact without the European Union: ‘we need a strong commitment, ownership and political leadership from Member States in the name and for the European Union’. Urmas Paet concluded that the discussion around EU security and defence policy is in fact about the future of European integration, and therefore all effort should be made to reinforce cooperation and unleash the dormant potential of the Lisbon Treaty. 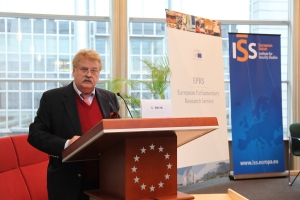 All the speakers also acknowledged the value of pragmatism in approaching cooperation on security and defence. ‘We should be more pragmatic and realistic and rely less on nice rhetoric that is so popular in the institutions and among the Member States. We have to be really action oriented’, said Sandra Kalniete. She further noted that the first and foremost priority in the implementation of the global strategy is to ensure coherence between the EU’s internal and external policies. To illustrate this point, Sandra Kalniete invoked the example of the Nord Stream 2 pipeline, which in her view is in clear contradiction with the EU’s strategic goal, but is pursued nevertheless. Urmas Paet stressed that the EU needs to move from reactive mode to a more proactive one. He further stated that the EU cannot handle everything, which is why the most logical solution is to focus on a limited number of issues, in particular the EU’s immediate neighbourhood to east and south – the origin of risks directly impacting the EU’s own security. Gabor Iklody contributed to the discussion with his own list of priorities. He recognised the importance of ‘traditional’ EU priorities – such as crisis management and capacity-building in third countries – and stressed the increasing focus on the protection of Europe through building better protection and resilience, targeting hybrid threats, as well as creating bridges between different agencies like Frontex and Europol. As examples of a pragmatic approach to cooperation, Gabor Iklody mentioned cooperation between EU forces participating in Operation Sophia and NATO’s operation Sea Guardian, created at the Warsaw NATO Summit in July 2016, and complementarity between operations led by Frontex and NATO’s military operation to assist refugees in the Aegean Sea. These exchanges reaffirmed Antonio Missiroli’s initial observation that the more the EU discusses concrete steps and actions that can increase its efficiency, the easier it is to agree – even between 28 Member States.