How the EU budget is spent: Nuclear decommissioning assistance 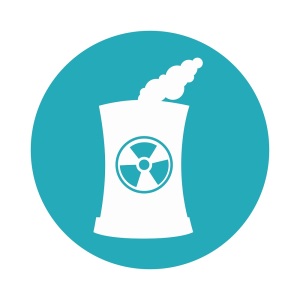 In the early 1990s, in the wake of the 1986 Chernobyl disaster, the EU began providing financial and technical assistance to partner countries in Eastern Europe and Central Asia via the TACIS and PHARE programmes. In 1999, the EU launched three nuclear decommissioning assistance programmes (NDAP) specifically to help Bulgaria, Lithuania, and Slovakia safely close and dismantle their early Soviet-designed reactors while acceding to the Union. The Commission estimates that by 2020, some €3.8 billion from the EU budget will have been spent on the NDAPs since 1999, providing financial assistance for decommissioning, dismantling and waste management projects; energy-sector projects aimed at mitigating the consequences of reactor shutdowns; and projects addressing the socio-economic consequences of decommissioning.

The 1957 Treaty establishing the European Atomic Energy Community is the general basis for joint EU nuclear research and safety measures, but the specific legal basis of each NDAP varies depending on the country: in the case of Lithuania, the 2003 Treaty on the country’s accession to the EU explicitly included the possibility that decommissioning operations would receive further financing beyond 2006. Conversely, for Bulgaria, Article 30 of the Protocol to its 2005 Accession Treaty limits financial support to 2007-2009, while for Slovakia the 2003 Accession Treaty limits funding to 2004-2006. Protocols attached to the above-mentioned accession treaties also set deadlines for closing the respective nuclear reactors.

EU financial assistance provided to the three countries through the NDAP has been implemented over four periods. During their first period (‘pre-accession’ up to 2004), Lithuania and Slovakia received funding through the Phare programme. One of the main EU instruments for pre-accession assistance to central and eastern European countries, Phare was later replaced by the Instrument for Pre-accession Assistance. Financial assistance over the second period (between 2004 and 2006) was provided under the protocols to the countries’ accession acts. Since 2007 (the third period), Council regulations have ensured the continuation of assistance for the Slovak and Lithuanian governments. The fourth period began in 2014 and will run until 2020.

Bulgaria’s later entry into the EU meant its first and second funding periods were slightly different. During its pre-accession period (up to 2007), Bulgaria received financing through Phare. For the 2007-2009 period, assistance to the country was provided under the protocol to the accession treaty. Following a formal request for the prolongation of the funding assistance presented in 2009, the Council adopted a new regulation to ensure the continuation of assistance until 2013. Assistance continues under the current 2014-2020 MFF, with commitments amounting to almost €970 million in current prices: €450.8 million for the decommissioning of Ignalina in Lithuania, €293 million for Kozloduy in Bulgaria, and €225.4 million for Bohunice in Slovakia. The Commission reports that no further EU financial assistance is planned beyond 2020. 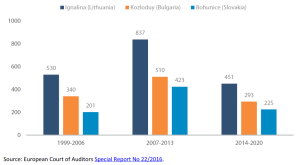