The European Commission at mid-term: State of play of President Juncker’s ten priorities 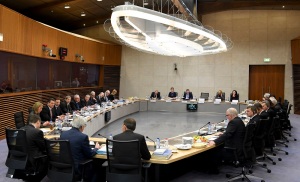 At a time when, more than ever, citizens expect the European Union institutions to address their concerns and deliver on promises and commitments made, this analysis provides an overview of the work carried out by the European Commission at the mid-term of its current mandate, notably in the context of its ten priority fields of action. It reviews what the Commission has delivered, compared with what it committed to doing before it received the European Parliament’s vote of consent and took office two and a half years ago. In so doing, this study seeks to provide an independent, objective and authoritative tool for Members of the European Parliament and the wider public to assess the performance to date of the current Commission.

The analysis reveals that overall, at the mid-term of its mandate, the College has delivered more than eight out of ten initiatives announced, of which approximately two fifths have reached the final stage, thus showing that the European institutions are collectively delivering. This average of course covers a variety of situations: in some of the priority areas, almost all of the originally announced initiatives have already been presented. Some, such as the connected digital single market, for example, have made significant progress; others less so, as is the case for negotiations on a free trade agreement with the United States. In yet other areas, such as justice and fundamental rights, or jobs, growth and investment, gaps still remain.

This analysis is both exhaustive – as it covers all the ten priority areas the Commission set itself – and selective – as it focuses, for each priority, on the main legislative proposals or initiatives and on the latest developments.

It aims to be both quantitative and qualitative: for each of the ten chapters, covering one of the ten priorities, it offers a qualitative overview prepared by the European Parliamentary Research Service’s in-house experts, complemented by a quantitative graphic providing a snapshot of initiatives at the key stages, from ‘requested by the European Parliament’ and/or ‘announced by the Commission’, to ‘submitted to the co-legislators’, ‘under negotiation’, ‘close to adoption’, ‘adopted’ or, in a few cases, ‘blocked’ or ‘withdrawn’. These snapshots are regularly updated on the ‘Legislative Train Schedule’ application on the European Parliament’s website.

Finally, the analysis is timely, as it comes, updated as of the end of June 2017, at the mid-term of the Juncker Commission’s mandate and just two months before the 2017 State of the Union speech to be delivered by the President of the European Commission to the European Parliament, during its September 2017 plenary session.

Read the complete in-depth analysis on ‘The European Commission at mid-term: State of play of President Juncker’s ten priorities‘. 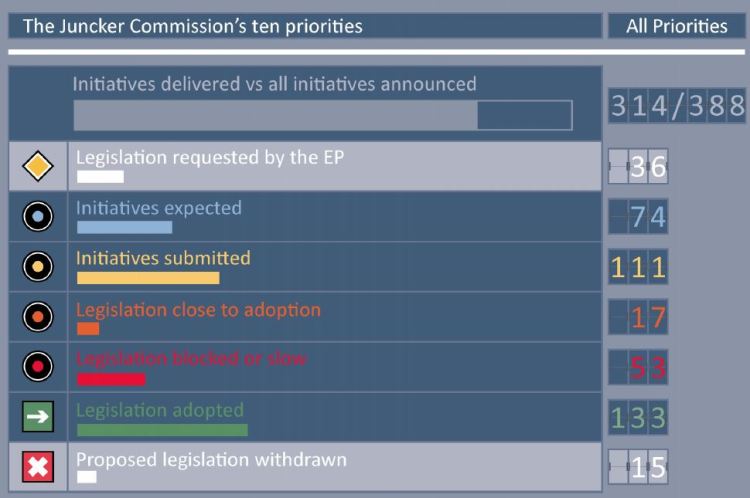