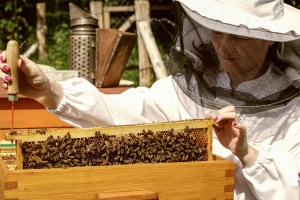 Every year, the EU’s 600 000 beekeepers and their 16 million beehives produce 200 000 tonnes of honey. This is not however sufficient to cover demand on the EU market, and the shortfall is made up by imports, above all from China. Threats to bee health and market competition make the economic viability of apiculture a critical matter. EU policies aim therefore to address these issues and promote beekeeping, an activity that is of vital importance to the environment.

Beekeepers and hives in the EU

The EU numbers approximately 600 000 beekeepers and 16 million hives according to 2016 data reported by the Member States. Only 4 % of EU beekeepers have over 150 hives, commonly considered the minimum for professional producers. However, this figure gives only an average indication of the number of hives that could provide a viable revenue, as the boundary between professionals and amateurs can vary across countries depending for example on differing profitability or income levels. Beekeepers are present in all EU countries, with big differences in terms of numbers and size (see Table 1). Germany accounts for about one in every six EU beekeepers, while there are only a few hundred in Cyprus, Luxembourg and Malta. In Italy, beekeepers with more than 150 hives manage 60 % of all bee colonies. While 72 % of EU apiculturists are members of a beekeepers’ association, differences across the EU show fewer affiliates in France, Italy, Poland and Spain. National figures show a drop in the number of beekeepers but an overall stable number of beehives over recent years. EU farm statistics confirm this trend as regards farms with beehives.

Honey is the best-known product of beekeeping, although other apiculture products (royal jelly, propolis, pollen and beeswax) and services (e.g. renting out bees for pollination) can represent a source of income for beekeepers. EU beekeepers produce an average of 200 000 tonnes of honey a year, which makes the EU the second world producer after China, with respectively 12 % and 28 % of world production. However, the EU is not self-sufficient and China is the main source of EU honey imports. EU beekeepers have relatively high production costs compared with world competitors, and the limited EU exports of honey are priced higher than imports to the EU.

Profitability is crucial for the sustainability of the apiculture sector. Like other agricultural producers, beekeepers must cope with production and market challenges. When it comes to production, various factors can affect productivity in a beekeeping enterprise. Outbreaks of animal diseases, exposure to chemicals, losses in plant diversity, adverse climatic conditions or the deterioration of bees’ natural habitats owing to natural or human factors can all threaten the productive capacity of beehives. These factors can also be among the causes of the bee health problems and high bee mortality rates registered in recent decades. Not only do bee colony losses affect the economic viability of apiculture, but threats to bee health are a source of much wider concern, well beyond beekeepers, given bees’ role in the natural pollination of cultivated crops and wild plants and therefore in the preservation of the environment and the production of food.

As for the market, world competitors with lower production costs and cheaper prices represent a threat to EU producers’ market share. Furthermore, a ‘control plan‘ organised recently by the European Commission has highlighted illicit practices (e.g. adulteration of honey with sugar) carried out both in and outside the EU. Non-compliance with EU rules on production standards, labelling, etc. affects beekeeper income and has triggered a call from producers for broader checks to secure fair competition on the EU market.

Agricultural policy measures always impact on beekeeping, whether directly or indirectly. Indirectly, they can help to improve the impact of farming practices on the environment (and thus on bees), for example by promoting the maintenance of permanent grassland or the adoption of environmentally friendly techniques. As for direct measures, apiculture products are part of the EU’s agricultural markets and, in this context, EU funds are available to support bee health, hive management, technical assistance, analysis and research, market monitoring and product quality. To benefit from these funds, which cover up to 50 % of total expenses, EU Member States draw up three-year national apiculture programmes in cooperation with beekeeping organisations (Article 55 of Regulation (EU) No 1308/2013). Every Member State has a programme in place, for an overall 2017‑2019 budget of €216 million (half from the EU budget) allocated according to the number of beehives in each country. Previous programmes used over 90 % of available EU funds. In defining measures to promote beekeeping, the European Commission can consult stakeholders in the civil dialogue group on animal products, whose strategic agenda seeks to promote beekeeping needs in EU agricultural policy making.

Beekeeping products can also benefit from promotion measures co-financed by the EU with a budget of over €100 million a year (Regulation (EU) No 1144/2014). Honey is included in several multi-product promotion campaigns in and outside the EU, while a Slovenian campaign is aimed at increasing public and beekeeper awareness of EU quality schemes. In this respect, more than 30 types of honey produced across the EU have received EU quality labels denoting protected designation of origin (PDO) or protected geographical indication (PGI), which can help to increase their economic potential.

EU policies covering areas other than agriculture can also help to address apiculture-related issues. On the plant protection side, for instance, decisions as to whether or not to authorise the use of a particular substance can have a significant impact on apiculture, as research has provided scientific evidence of the effects of certain pesticides on bees. On the food security side, the recently adopted Regulation (EU) 2017/625 on checks and penalties related to marketing rules in the EU food industry could benefit apiculture given the differences in production practices across the world and the high quantity of imported honey in the EU. This legislation contains measures that could help to fight honey adulteration fraud by producers both in and outside the EU. Various EU-funded research projects have studied bee health, honeybee colony losses, beehive management, etc. A recent €9 million project financed by the EU research and innovation programme Horizon 2020 is investigating hazard identification for bees, focusing on exposure to chemicals, the presence of pathogens, and bee nutrition. The European Food Safety Authority is, meanwhile, setting up an EU Bee Partnership (expected to be up and running in 2018), a platform for sharing data on bee health.

In its role as co-legislator, Parliament has adopted a number of measures promoting EU beekeeping. The 2013 reform of the CAP addressed concerns expressed in a number of Parliament resolutions on bee health and the situation of beekeeping (20 November 2008, 25 November 2010, 15 November 2011), while an own-initiative report (2017/2115(INI)) tabled by the rapporteur Norbert Erdös (EPP, Hungary) on prospects and challenges for EU beekeeping is currently under deliberation. Alongside its legislative contribution, Parliament recently hosted a hearing on the apiculture sector, while the sixth annual edition of Beeweek took place earlier this year. Stakeholders used these opportunities to share their views on the challenges facing beekeeping and the need to support its vital role for the environment, agriculture and rural areas, and have put forward a position paper on the future of EU agricultural policy, calling for concrete action to promote bee-friendly farming.

Read this At a glance on ‘The EU’s beekeeping sector‘ on the Think Tank pages of the European Parliament. 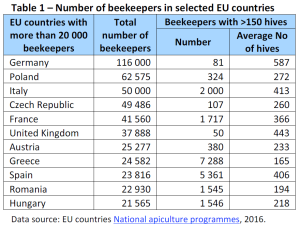