Free movement of goods within the EU single market 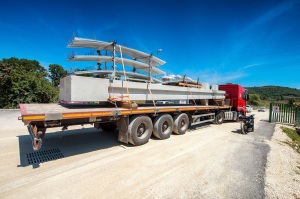 The free movement of goods is one of the four fundamental freedoms of the EU – together with services, capital and people – and a cornerstone of the single market. The rationale of an open market throughout the EU has always been to assist economic growth and competitiveness and therefore promote employment and prosperity. Legislation on the single market for goods (based mainly on Article 28 of the Treaty on the Functioning of the European Union, TFEU) aims at ensuring that products placed on the EU market conform to high health, safety and environmental requirements. Once a product is sold legally in the EU, it should circulate without barriers to trade, with a minimum of administrative burden.

intra EU exports of goods as a share of GDP

From 1957, the European Commission and EU Member States concentrated their efforts on bringing tariffs (customs duties) down within the newly formed European Economic Community, which led to the establishment of the customs union in 1968. Intra-EU tariffs and quantitative restrictions to imports (quotas) disappeared, and the EEC had a common external tariff for trading with the rest of the world.

To ease market activities across internal borders, the customs union was gradually upgraded to an internal/single market. Buying and selling, lending and borrowing, producing and consuming were facilitated first by harmonising rules EU-wide. However, this harmonisation could not keep pace with the continual creation and change in national rules. In addition, measures with an effect equivalent to quotas and customs duties remained in place. These could be fees for placing a product on the market or, for example, prohibiting the sale of a product that could compete with a national/regional/local product a Member State wanted to protect. In its landmark Cassis de Dijon ruling, the European Court of Justice stipulated that other Member States had to allow imports of any product legally placed on another national market. The Commission’s comprehensive single market programme of 1985 stipulated 1992 as the date for completion of the single market, and the 1987 Single European Act introduced qualified majority voting in the Council, which helped to speed up the process.

How does the free movement of goods work in practice?

Since the abolition of intra-EU tariff barriers in 1968, much of EU policy-making has been aimed at reducing non-tariff barriers to trade (NTBs). These can be different product standards, health and safety rules, tax systems, or currency devaluations. The European Free Trade Agreement (EFTA) countries, Iceland, Norway, and Liechtenstein (but not Switzerland), are also part of the single market since the creation of the European Economic Area in 1994. The EU institutions consult EFTA countries when taking decisions on the single market.

The free movement of goods applies to both harmonised and non-harmonised products:

However, this principle of mutual recognition is not absolute, as Member States may still restrict imports if higher principles, such as public health, security, and consumer protection, are at stake (Article 36 TFEU).

The EU customs union and what its rules mean for consumers

The 28 national customs services of the Member States work together within the EU customs union, applying the Union Customs Code, which streamlines customs procedures, especially for imports from outside the EU. When individuals travel from one Member State to another, they can buy goods without restriction, if they transport them themselves, and if the goods are for their personal use and not for resale. New cars and other transport vehicles are an exception to this rule, and there are also restrictions concerning products subject to excise duties. For instance, a person may not carry across borders more than:

Restrictions also apply to energy products such as petrol, heating oil and gas, coal, coke and electricity. For more information on rights and benefits for consumers see the EPRS briefing, ‘European added value in action: Protecting and empowering consumers’.

European added value of the free movement of goods

The free movement of goods allows businesses to access a market of over 500 million people. The Commission considers that the single market has given producers easier access to a wide range of suppliers and consumers, has reduced unit costs in production, and created greater commercial opportunities. Helping companies place goods on other markets within the EEA also favours technological innovation. EU consumers profit from lower prices, EU-wide consumer legislation, environmental protection standards in manufacturing, and safety rules. The EU has already boosted trade significantly by dismantling NTBs; indeed trade in goods was found to be 73 % higher in the internal market than it would have been in a free trade area (where only tariffs have been removed).

Challenges to improving the free movement of goods

When companies wishing to trade across borders encounter regulatory barriers, this creates compliance costs that business have to bear in order to exploit the full potential of the single market. EU-wide rules solve these problems, provided that they are implemented correctly, uniformly across Member States, and promptly. According to the European Commission, the transposition deficit across all Member States for EU directives reached 1.5 % in 2017 (above the target of 1 % set by the European Council), and the average delay in transposing directives into national law is 6.7 months. Only 0.7 % of directives were incorrectly implemented.

Of existing EU single market legislation, 24 infringement proceedings on average per Member State were open in 2017, a slight decrease over the previous six months. Resolving these cases however takes on average three years, which makes life more difficult for the companies hoping to do business in the countries affected. A majority of these cases were due to the incorrect application of EU law, principally concerning environmental regulation, (indirect) taxation and public procurement. In 2014, a ‘cost of non-Europe report’ on the free movement of goods estimated that only 3.4 % of public tenders were awarded to foreign bidders (2006-2010), because of discriminatory practices by public bodies and national differences in environmental regulation and taxation regimes. These differences are especially hard on small and medium-sized enterprises (SMEs), which frequently lack the resources to keep themselves up-to-date on legal changes in other Member States. Furthermore, when implementing EU single market legislation, Member States often take the opportunity to add further standards of their own (‘gold plating’), making business yet more difficult for foreign companies. In conclusion, the study identified two remaining obstacles to intra-EU trade: barriers to FDI and non-tariff barriers, including a lack of harmonised rules and different treatment of foreign suppliers. In its resolution of 26 May 2016 on non-tariff barriers in the single market, the European Parliament stated that SMEs and micro-enterprises are disproportionally affected, and underlined the importance of the mutual recognition principle.

Perspectives: Removing barriers to trade in goods could add €183 billion to EU GDP 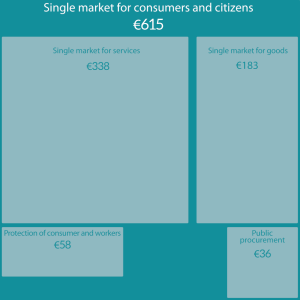 single market for consumers and citizens

The graphic below, from the European Parliamentary Research Service publication, Mapping the Cost of Non-Europe 2014-19 (4th edition), illustrates how many billion euros could be gained from the pursuit of further integration. In particular, it shows that the EU economy would gain at least €183 billion if all barriers to FDI and non-tariff barriers were to fall with immediate effect (2013 calculations). The potential gains for the single market for goods are smaller than for services because integration for goods is quite far advanced, although potential remains for yet greater growth. This gain would be achieved in the long term because it is assumed that barriers would be lowered gradually. Removing both barriers to FDI and non-tariff barriers could help increase exports of goods in the internal market for all EU countries and more than 10 % for the countries that stand to gain most: Croatia, Estonia, Latvia, Lithuania, and Slovenia. Larger firms would profit more than smaller ones from removing obstacles to FDI, as they are often the first and main beneficiary of FDI. SMEs are set to gain most from the removal of non-tariff barriers: at present, companies incur fixed costs for every export market they enter in order to comply with regulatory requirements. For SMEs, these costs can be too high to make exports profitable. If one regulatory system applied across the EU, there would be enormous potential for SMEs to gain economies of scale: making the effort to comply once would open all other markets in the EU-28. The economic boost stemming from such a widening of opportunities for companies would lead to the creation of 2 % more jobs. Consumers would also benefit from an increase in supply, which should help to reduce domestic prices.

Read the complete briefing on ‘Free movement of goods within the EU single market‘ on the Think tank pages of the European Parliament.