Residents in disaster stricken regions [What Europe does for you]

Posted by Members' Research Service ⋅ April 29, 2018 ⋅ Leave a comment
Filed Under  My area, natural disasters, Podcasts, What Europe does for you

With European elections coming up in May 2019, you probably want to know how the European Union impacts your daily life, before you think about voting. In the latest in a series of posts on what Europe does for you, your family, your business and your wellbeing, we look at what Europe does for residents in disaster stricken regions.

Who is safe from a disaster striking? Flooding, heat waves and droughts are the most common hazards, but almost a quarter of the European population is also potentially at risk of an earthquake and 11 million live in dangerous proximity to an active volcano.

When disaster strikes, the victims need immediate relief and long-term reconstruction support. In both cases, the EU is here to help.

Through its Civil Protection Mechanism, the EU coordinates voluntary offers of in-kind aid and the deployment of rescue teams in the immediate aftermath of disasters. Since 2001, this mechanism has been activated more than 200 times, including in 2017 with the response to the devastating forest fires in France and Portugal. Another structure, the European Responses Coordination Centre (ERCC) acts as a 24/7 contact point in case an EU country activates the Solidarity Clause in the EU Treaty, which triggers mutual assistance amongst EU countries in case of disasters and terrorist attacks. 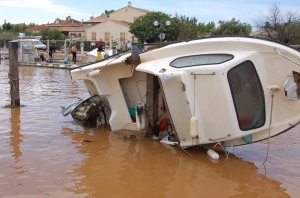 To support long-term disaster recovery, EU countries can receive aid from the European Solidarity Fund, which mobilises €500 million every year. Since its creation in 2002, the Fund has been used 76 times in 24 different countries.

Including money available from the European Regional Development Fund, EU support for reconstruction of disaster-stricken regions, alike Portuguese Centro region devastated by fire in June 2017, is likely to reach €9.8 billion for the period 2014-2020. Since July 2017, up to 95 % of a reconstruction project can be financed by the EU.