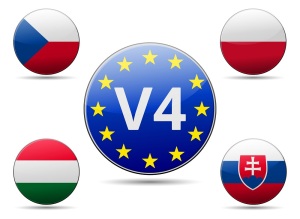 Political developments in the Visegrád Group countries have raised concern over the commitment of some of their leaders and senior politicians to European Union values, notably the rule of law. The Visegrád Group is an informal alliance of the Czech Republic, Hungary, Poland and Slovakia, all of which joined the EU in 2004.

Criticism by EU officials and some other Union governments centres on Hungary and Poland, where governments have implemented a number of controversial reforms, notably of the judiciary. In December 2017, the European Commission triggered the first phase of Article 7 of the Treaty on European Union, which can ultimately deprive a country found guilty of violating EU values of voting rights. In addition, a European Parliament draft report notes a deterioration of the rule of law in Hungary, where Prime Minister Viktor Orbán won a third term in office in the country’s recent general election.

This note offers links to recent commentaries, studies and reports from major international think tanks on the Visegrád Group, its internal relations and its role within the EU, with the focus on the rule of law debate.

The rule of law debate

How can Europe repair breaches of the rule of law?
Notre Europe, April 2018

First victims or last guardians? The consequences of rule of law backsliding for NGOs: Case studies of Hungary and Poland
Centre for European Policy Studies, April 2018

The consensus fights back: European first principles against the rule of law crisis
Verfassungsblog, April 2018

CJEU opens the door for the Commission to reconsider charges against Poland
Verfassungsblog, March 2018

The Court is dead, long live the courts? On judicial review in Poland in 2017 and ‘judicial space’ beyond
Verfassungsblog, March 2018

Maintaining the rule of law in Poland: What next for the article 7 proceedings?
Institute of International and European Affairs, February 2018

Beneath the surface of illiberalism: The recurring temptation of ‘national democracy’ in Poland and Hungary, with lessons for Europe
Wise Europa, Heinrich Böll Stiftung, February 2017

Illiberal democracies in the EU: the Visegrad group and the risk of disintegration
Barcelona Centre for International Affairs, January 2018

The Commission takes a step back in the fight for the Rule of Law
Verfassungsblog, January 2018

Systemic threats to the rule of law in Poland: between action and procrastination
Fondation Robert Schuman, November 2017

Infringement proceedings as a tool for the enforcement of fundamental rights in the European Union
Open Society Foundations, October 2017

The open society and its enemies: An attack against CEU, academic freedom and the rule of law
Centre for European Policy Studies, April 2017

The Commission’s decision on ‘less EU’ in safeguarding the rule of law: A play in four acts
Centre for European Policy Studies, March 2017

The future of the Visegrad Group
Das Progressive Zentrum, March 2018

Labour market reform and Visegrad countries: Deep rooted concerns and how to address them
EUROPEUM, February 2018

Macron’s new Europe: How do the Visegrad countries fit in?
Centre for Euro-Atlantic Integration and Democracy, February 2018

Many shades of the Visegrad Group
Association for International Affairs, November 2017

After the elections in the Czech Republic: The end of liberal democracy in Central Europe?
Heinrich Böll Stiftung, October 2017

The future of the EU beyond Rome: Views from the Visegrad countries
Center for European Neighborhood Studies, September 2017

Meeting of Prime Ministers of the Visegrad Group and Benelux
Polish Institute of International Affairs, June 2017

Sharing the responsibility or shifting the focus? The responses of the EU and the Visegrád countries to the post-2015 arrival of migrants and refugees
Foundation for European Progressive Studies, Stiftung Mercator, Istituto Affari Internazionali, Istanbul Policy Center, May 2017

Listen to Us, too! Flight, migration, and integration from the perspective of NGOs in the Visegrad region
Friedrich Ebert Stiftung, March 2017

The role of the Kremlin’s influence and disinformation in the Czech presidential elections
European Values, February 2018

Andrej Babiš and the European Union: What to expect in 2018?
EUROPEUM, January 2018

Can EU funds promote the rule of law in Europe?
Centre for European Reform, November 2017

Hungarian politics is about to enter a new period
German Marshall Fund, April 2018

Cohesion policy and perceptions of the European Union in Hungary: A cultural political economy approach
Center for Policy Studies, December 2017

Stabilization policies and structural developments: Poland and the crises of 1929 and 2008
Center for Social and Economic Research, December 2017

The influence of economic migration on the Polish economy
Center for Social and Economic Research, Fondation Robert Schuman, November 2017

Read this briefing on ‘The Visegrad Group and the rule of law‘ on the Think Tank pages of the European Parliament.