Journal of Common Market Studies Annual Review– 2019 Lecture: ‘How the EU 27 came to be’ 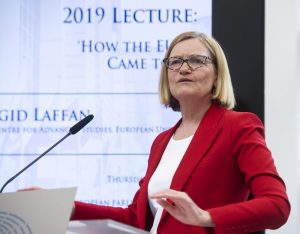 On 4 April, EPRS hosted, in Parliament’s Library Reading Room, the Journal of Common Market Studies Annual Review 2019 Lecture – ‘How the EU27 came to be’, this year delivered by Professor Dr Brigid Laffan, Director of the Robert Schuman Centre for Advanced Studies at the European University Institute in Florence.

Following a warm welcome from EPRS Director General Anthony Teasdale, Dr Emanuele Massetti, Co-Editor of the JCMS Annual Review and moderator of the event, explained that the Annual Review is a key component of the Journal of Common Market Studies (JCMS). It shares the JCMS’ overall aim of publishing high quality, innovative and accessible articles that advance debates in European and comparative regionalism studies. Within this common endeavour, the specific role of the Annual Review is to provide rigorous analyses of the most important events and/or trends that emerge year by year in the context of the European Union, including an Annual Lecture delivered by a leading scholar or practitioner.

The Annual Review covers the key developments in the European Union, its Member States, and acceding and/or applicant countries in the previous year, including important developments in the domestic or external arena that shape the political debates in Europe. In line with the ethos and inspiring principles of the JCMS, the Annual Review is a multidisciplinary outlet, open to all methodological and theoretical approaches.

Professor Laffan explored what the EU response revealed about the Union, what membership means and the crucial difference between differentiation within the Union and as an external partner. Her aim was to understand and explain the Union response. Professor Laffan argued that Brexit is very revealing of the DNA of the European Union and the Union’s resolve to use its full capacity. In addition, Professor Laffan examined what Brexit helped reveal, through the EU’s response, about the Union, and the EU27’s actions since 2016 to reinforce its own inherent resilience.

Brexit revealed that the EU has become much more polity-like, unafraid of deploying power through the challenges of the multiple crises it faces. According to Professor Laffan, the EU showed a formidable capacity and is capable of deploying it collectively and strategically, particularly when its interinstitutional and Brussels/capitals networks work well – this enhances capacity. Finally, yet importantly, methods do matter. Unity after 2016 was not accidental – it was hard-won.

« Launch of the new ESPAS foresight report
Living in the EU »