The power of the European Parliament

The only directly elected European Union (EU) institution; the European Parliament’s (EP) power and influence in pursuit of citizens’ interests have evolved significantly, transforming it into a full-fledged legislative body and forum of discussion and engagement at the heart of representative democracy, whose influence is felt in virtually all areas of EU activity.
What are then the European Parliament’s main powers?

What difference does the Parliament’s work make to how Europeans live their lives? This series highlights some practical examples of EP impact during the 2014-2019 legislative term. 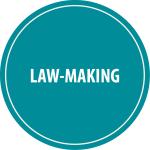 In June 2018, the EU institutions reached agreement on a substantial revision of the Renewables Directive (RED), which sets an ambitious framework for the promotion of renewable energy sources in the EU over the 2021-2030 period. This includes a 32 % binding headline target for the share of renewables in EU energy consumption, as well as more stringent criteria for the environmental sustainability and greenhouse gas emissions savings of biofuels. After formal approval in December 2018, the revised RED entered into force on 24 December 2018. Member States are required to transpose all of its provisions into national law by 30 June 2021.

During the negotiations, the European Parliament pushed for greater ambition in the RED and succeeded in achieving many of its key objectives. As a result, the RED includes: a binding EU headline target of a minimum 32 % share of renewables in EU final energy consumption by 2030 (this is well above the 27 % target set in October 2014 by the European Council, and reiterated in the 2016 European Commission’s original proposal); a 14% target for the share of renewables in the transport sector (a target which the Commission had proposed to remove entirely from the directive). Furthermore, Parliament introduced a review clause in the RED that would allow the Commission to submit a new legislative proposal in 2023 with more ambitious and binding targets. These could be justified on three likely grounds: i) in order to meet global climate change goals, ii) if renewable technologies generate significant cost reductions, or iii) if greater efficiency leads to a substantial decline in energy use.

Parliament also had considerable influence in shaping the details of the revised RED, particularly in: encouraging the decentralised production of electricity from renewable sources; pushing for a detailed enabling framework that would allow the principles of renewable self-consumption and renewable energy communities to be effectively realised; shortening to just one year the permit-granting period for small scale electricity installations, and exempting them from certain market requirements. EU Member States are now required to draw up long-term schedules of their renewable support schemes, and provide information about their contributions on an EU Renewable Development Platform.

Parliament also pushed to phase out the use of certain biofuels such as palm oil that are environmentally unsustainable and lead to natural habitat destruction. It succeeded in obliging the Commission to rapidly develop a certification scheme for biofuels, and phase out entirely the use of biofuels from crops that are damaging for the natural environment.

a mapping of EP powers

The latter procedure consists of the joint adoption of an act by the European Parliament and the Council on the basis of a proposal by the Commission. Here, both legislators need to agree on an identical text before it becomes law, which may take up to three readings in each of the two institutions. On average, it takes about 22 months for legislators to agree on a legislative file, starting from the Commission proposal until the signature of the final act.

The number of areas in which the Parliament co-legislates has expanded greatly over time and now includes the EU internal market, environment, consumer protection, food safety, regional development, agriculture, transport, energy and many others. Indeed, most legislative acts are now adopted following the ordinary legislative procedure.

Besides the power of consent with regard to legislative acts, the Parliament’s consent is required in many other instances not related to legislative acts in the strict sense. For example, it is needed before any new country joins the EU (Article 49, Treaty on European Union, TEU), but also before any withdrawal treaty can be concluded when a country decides to leave it (Article 50 TEU). The Parliament’s consent is also required before concluding agreements with third countries, for example association agreements, as well as before the Council determines that an EU Member State is breaching – or is about to breach – EU values (Article 7 TEU).