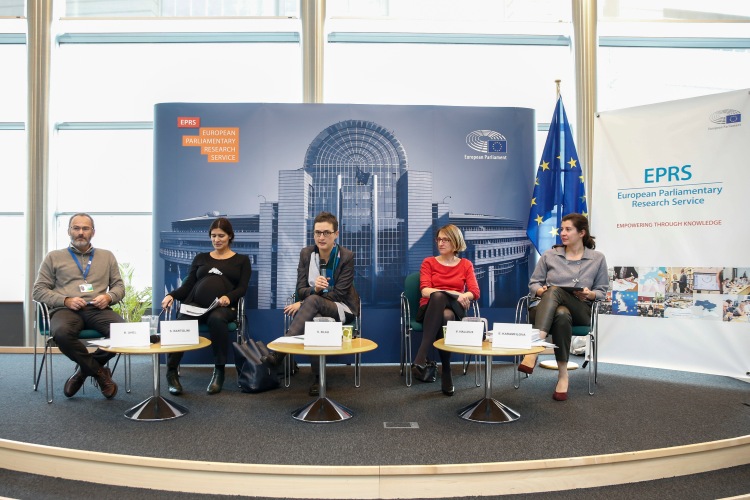 EPRS Director-General Anthony Teasdale introduced an EPRS Briefing Seminar on ‘Understanding EU environment policy: state-of-play and future challenges’ on Wednesday, 13 November 2019, as the second in a new series of events organised by EPRS, aiming to inform Members and their staff on EU policies and the institutions involved. The panel discussion, moderated by Sarah Blau, Head of Secretariat of the European Parliament’s Committee on the Environment, Food Safety and Public Health, featured speakers from the European Environment Agency, the European Commission and EPRS.

Ronan Uhel, Head of the Natural Capital and Ecosystems Programme of the European Environment Agency, explained the links between environmental issues and the evolution of EU environmental legislation. While it all started with the aim of tackling heavy environmental pollution and maintaining environmental media (e.g. air, water) in good shape, EU legislation has now become an instrument to address the degradation of our environment. In his view, the cause of this shift is that for the last 40-50 years, we have developed societies at the expense of their connection to their natural essence.

Silvia Bartolini, Head of the Inter-Institutional Relations Unit of DG Environment of the European Commission, presented the European Green Deal to which Commission President-elect Ursula von der Leyen committed in her political guidelines. Bartolini focused on the environmental pillar of the Green Deal, as well as on the financial aspects of the expected profound future transitions in the European economy and societies. In particular, in the coming years, the Commission will build its environmental policy on three flagship initiatives: biodiversity, a new circular economy action plan and a zero-pollution ambition for Europe.

Vivienne Halleux, Policy Analyst with the Economic Policies Unit of the EPRS Members’ Research Service, outlined the EU environment policy framework and presented an overview of Parliament’s work on the main legislative files in the last term, such as those linked to the circular economy action plan. She also highlighted some of the topics on Parliament’s agenda for the current term, such as biodiversity, water and air quality.

Ekaterina Karamfilova, a Policy Analyst with the Ex-post Evaluation Unit of EPRS, informed the public about the state-of-play of implementation of EU environment policy at national level. Referring to the findings of an EPRS study on the mid-term review of the ongoing 7th Environment Action Programme, she identified biodiversity, waste management, air pollution and noise as the most problematic areas. She also highlighted a few issues for the EP to watch during the new term and stressed on the importance of Member States’ capacities to implement environmental policies.

The fact that environmental concerns are not sufficiently integrated (mainstreamed) in other policy areas (for example, agriculture, transport, industry, etc.), and that breaking down these silos is needed, emerged as a shared issue of concern for the four panellists.

The next event in the series of EPRS Briefing Seminars will be held on Wednesday, 4 December, on Understanding EU policy on international crime and terrorism. As announced by Anthony Teasdale, a briefing seminar on EU climate policy is scheduled for February 2020.