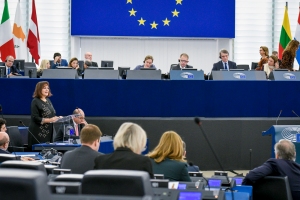 January highlights included statements on ongoing hearings on the rule of law under Article 7(1) of the Treaty on European Union (EU) regarding Hungary and Poland; bushfires in Australia and climate change consequences; cross-border organised crime and its impact on free movement; a common charger for mobile radio equipment; the gender pay gap; and the ‘Housing First’ approach to address homelessness. Parliament also debated statements on the situation in Iran and Iraq, in Libya, and in Venezuela following the illegal election of the new National Assembly Presidency and Bureau. Members voted on annual reports on implementation of the common foreign and security, and foreign and defence policies. Members debated citizens’ rights provisions in the UK Withdrawal Agreement. They also voted on a resolution on the European Green Deal, following their debate in December’s special session – on the day on which the Commission had itself adopted and presented its plans. In addition, His Majesty King Abdullah II of Jordan addressed a formal sitting of Parliament.

Presentation of the programme of activities of the Croatian Presidency

Members debated Council and European Commission statements presenting the programme of the new (and first) Croatian Council Presidency. The priorities for the six-month tenure include developing European economic and social cohesion and convergence; making stronger connections between European citizens, focusing on infrastructure for smooth mobility of people and goods; boosting internal security to protect citizens and tackling migration issues; and strengthening multilateralism and Europe’s influence in the world.

Conference on the Future of Europe

Members adopted, by a large majority, Parliament’s position on arrangements for the Conference on the Future of Europe, which closely follows the text agreed by Parliament’s Conference of Political Group Presidents. Parliament has high expectations for the conference, and is eager to contribute to a design that affords maximum opportunities for citizen contribution, while avoiding the pitfalls inherent in any selection. A Parliament working group is reflecting on ensuring that the conference structure, aims and scope are realistic and result in meaningful outcomes.

COP15 of the Convention on Biological Diversity (Kunming 2020)

Parliament debated a Commission statement on the COP15 of the Convention on Biological Diversity, and adopted a resolution in view of the 15th meeting of the parties to the United Nations Convention on Biological Diversity in Kunming, China in October 2020. The EU post-2020 biodiversity framework (to 2030) needs to be in place in time for this meeting. However, Parliament is asking how the Commission proposes to strengthen implementation of biodiversity-protection measures, given the failure to achieve 2020 targets.

2018 Annual report on human rights and democracy in the world

Members debated and adopted Parliament’s position on the 2018 Annual report on the human rights and democracy in the world and the European Union’s policy on the matter. The report takes stock of all EU action in human rights and democracy, and Parliament takes the opportunity to review EU action and make recommendations for the future, in an annual resolution adopted in response to the report.

Negotiations ahead of Council’s first reading

The President announced five Legal Affairs (JURI) Committee decisions to enter into interinstitutional negotiations, in accordance with Rule 72. Parliament’s positions adopted earlier at first reading will provide the mandates for these negotiations.

Read this ‘at a glance’ on ‘Plenary round-up – Strasbourg, January I 2020‘ in the Think Tank pages of the European Parliament.