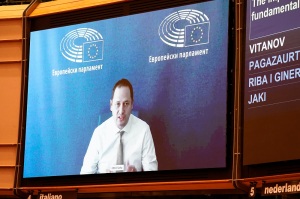 During the second November 2020 plenary session, Parliament held a number of debates with Council and the European Commission. Discussions concerned fundamental rights issues such as abortion rights in Poland, the new LGBTIQ equality strategy, and Hungarian interference in the media in Slovenia and North Macedonia. In a debate with Council and Commission, Members also discussed the forthcoming European Council meeting, on 10‑11 December 2020. Debates with the Commission included discussion of a new consumer strategy and a pharmaceutical strategy for Europe. Vice-President of the Commission/High Representative of the Union for Foreign Affairs and Security Policy, Josep Borell made statements on escalating tensions in Varosha, and on the fight against impunity for crimes committed against journalists around the world, followed by a debate with Members. Members also voted, inter alia, on representative actions for the protection of the collective interests of consumers, on customs duties on certain products, on tariff quotas with Northern Ireland, as well as on a number of own-initiative reports, including on industrial policy.

Towards a more sustainable single market for business and consumers

Members approved, by large majority, an Internal Market (IMCO) Committee own-initiative report on improving the sustainability of the single market for both business and consumers, suggesting that consumers could be encouraged to make better environmental choices by ensuring a ‘right to repair’, improving guarantees and promoting better product information. Members took the opportunity to underline the need to ensure product safety and the protection of consumer rights.

Amending Budget No 9/2020: Mobilisation of the EU Solidarity Fund

In response to the coronavirus public health emergency in seven EU countries, as well as an earthquake in Croatia and flooding in Poland, Members voted on draft amending budget 9/2020, thereby approving the release of a total of €823.5 million from the EU Solidarity Fund to help people in the affected regions. The decision authorises the Commission to begin assessment of the requests for assistance it has received.

Members debated and adopted an own-initiative report from the Foreign Affairs (AFET) Committee on the foreign policy consequences of the Covid‑19 outbreak, following a short presentation. Members underlined the need for the EU to seize the opportunity to respond to the challenges of the evolving international landscape, where both the pandemic and recent United States elections highlight the need for a stronger role in rebuilding the multilateral order and defending EU values.

Members heard and debated a statement from the Vice-President of the Commission/High Representative of the Union for Foreign Affairs and Security Policy on the geopolitical implications of the Abraham Accords (held over from the November I session). Parliament has a long commitment to peace in the Middle East, and (despite Palestinian Authority and Palestinian factions’ concerns), has welcomed the United States-brokered normalisation of relations between Israel and the United Arab Emirates, Bahrain and Sudan.

Strengthening media freedom in the EU

Members debated, and by majority adopted, Parliament’s Committee on Civil Liberties, Justice and Home Affairs (LIBE) own-initiative report on the deteriorating media environment in Europe and measures to strengthen media freedom, protect journalists, and tackle hate speech and disinformation in the EU. The LIBE report highlights areas where EU action could improve the situation, including: ensuring robust media freedom and pluralism, and the political and financial independence of the media; protecting (particularly investigative) journalists; and charting a course through the tension between justified freedom of expression and unjustified permissibility of hate speech, as well as disinformation. The committee proposed stronger monitoring and increased measures against misinformation, particularly on the part of digital platforms.

Istanbul Convention: A tool to tackle violence against women and girls

Partly due to the coronavirus crisis, violence against women has worsened in the EU. Parliament has consistently supported a strong stance on the issue, repeatedly calling for EU accession to the Istanbul Convention. Members heard a Commission statement on the Istanbul Convention, which sets legally binding standards on prevention of such violence. Parliament’s President underlined the EU commitment to non-violence and equality, and the Chair of the Women’s Rights & Gender Equality Committee reiterated the call for all EU countries to ratify the Convention. However, as things stand, Parliament will not be formally requested to consent to EU conclusion of the Convention until the European Court of Justice has delivered an opinion on the Convention’s compatibility with the Treaties.

Taking stock of the 2019 European elections

Members voted by large majority to adopt a Constitutional Affairs (AFCO) Committee own-initiative report proposing to strengthen the European electoral process. Welcoming the higher turnout in 2019, Members regretted however that the results do not reflect the true diversity and gender balance in Europe’s population. They also warned against foreign interference in elections and put forward a number of possible improvements to the European electoral system, such as remote voting for citizens in specific circumstances; transnational lists; and the establishment of a European Electoral Authority, among other things. Furthermore, Members suggest a reflection on the Spitzenkandidaten process.

Read this ‘at a glance’ on ‘Plenary round-up – November II 2020‘ in the Think Tank pages of the European Parliament.