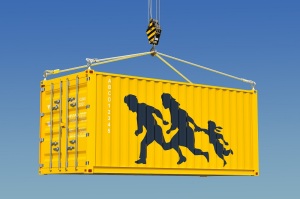 Around 90 % of those who cross the external European Union (EU) borders illegally do so with the assistance of migrant smugglers. Furthermore, the facilitation of irregular migration is a highly profitable criminal activity, in particular when compared with the relatively low risks incurred. Even though detections of illegal border crossings are currently at their lowest level since 2013, the migrant smuggling business shows sustained high levels of demand.

This demand is not only due to the fact that people in severe distress – whether for economic reasons or because of a genuine fear for their lives – keep trying to reach the EU, by irregular means if necessary. Demand is also high because illegally crossing borders has become harder, due to increased external border controls and other measures put in place to prevent irregular migration. This is where migrant smuggling networks step in.

Migrant smugglers are among some of the most agile criminals. They go to great lengths in order not to get caught, quickly adapting the routes they use to smuggle migrants into the EU and their means of travel. They avoid direct contact with their victims, instead using the latest digital communication technologies and involving different intermediaries along a migrant’s journey. The facilitation of irregular migration is a complex crime, interconnected with many other criminal activities, such as document fraud, trafficking in human beings or other types of illicit smuggling.

Although people willingly pay smugglers to help them cross borders, they do so at great personal risk. Too many lose their lives, or are at risk of serious harm or exploitation. Therefore, preventing and combatting migrant smuggling and related crimes is one of the key priorities of the EU’s action against irregular migration and organised crime. The European Parliament has repeatedly called for more and better operational cooperation, data sharing and legal migration channels, and insisted on better implementation of relevant EU legislation.

Read the complete briefing on ‘Understanding EU action against migrant smuggling‘ in the Think Tank pages of the European Parliament.

Figure 1 – Migration routes and illegal crossings to the EU

« How coronavirus infected sport
After the storming of the US Capitol: A second impeachment trial of President Trump? »