Ukraine after Minsk II: the next level 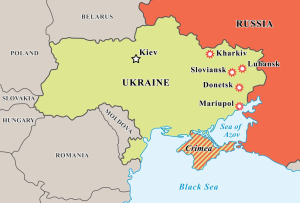 One month after leaders from France, Germany, Ukraine and Russia reached a 13-point peace agreement in Minsk on 12 February 2015 – Minsk II, a follow-up to the September 2014 Minsk Protocol – the ceasefire is shaky, although it has at least reduced the number of deaths in combat, and the pressure on the international community to act continues.

While Russia denies accusations that it has been sending troops and weapons to support separatists in Ukraine’s east, the undeclared ‘hybrid war’ is developing on all fronts. In the face of a shaky ceasefire and Ukraine’s crumbling economy, the EU, the US and major international actors are discussing possible political, military, and economic responses to the deteriorating crisis. At the same time, EU Member States and NATO are stepping up efforts to counter Russia’s ‘information warfare’.

The on-going crisis in Ukraine erupted after former President Viktor Yanukovych refused to sign an Association Agreement with the EU in November 2013 and sought closer ties to Russia. Russia’s active role in the eastern Ukraine crisis has exposed divides in the EU and the international community on how to react to hybrid threats. It comes at a time when the effectiveness of the EU’s Neighbourhood Policy, including the Eastern Partnership, is being questioned.

This briefing is a follow-up to the 12 February 2015 briefing ‘Minsk peace agreement: still to be consolidated on the ground’ .

Read this Briefing on Ukraine after Minsk II: the next level in PDF

4 thoughts on “Ukraine after Minsk II: the next level”