It is expected that half of all children born in the European Union (EU) since the year 2000 will live to be at least 100 years old. This was just one of the facts, challenges and opportunities presented and discussed at a EPRS roundtable event ‘Demographic change in Europe’.

Europe’s ageing demographics is a well-known phenomenon with major implications for European society, economy, pensions and healthcare systems. One driver has been improving longevity – between 1950 and 2012, life expectancy at birth has increased by 9.2 years for men and 9.9 years for women in the EU. According to the experts present, this trend is set to continue and these longer lifespans can also be healthier, mentally and physically as biological ageing is slowed. One example cited was that the risk of death for a 68-year old Swedish woman in 2010 was the same as that faced by a 57-year old Swedish woman in 1950, meaning ’68 is the new 57!’.

But another even more important driver of ageing Europe is lower fertility rates. There are of course concerns about the size and growth of the world population – estimated in 2014 to be 7.2 billion and growing by 82 million (1.4%) every year – on a planet of fixed size and limited resources. But the panel felt that low fertility rates (well below replacement levels) in the majority of EU Member States should give cause for reflection. Speakers cited a number of potential factors, including the lack of the right childcare and schooling, as possibly inhibiting some people who would like children from having them.

Recognising these trends in longevity and fertility, there were suggestions from the speakers that we may need to consider different life courses to spread work out over a longer time-span. Following this path could facilitate a much better work–life balance, particularly during the child-rearing years, whilst also allowing for longer working lives and more gradual retirements to compensate.

Another important question was what demographic change may imply for the EU’s place in the world and that of its individual citizens. The EU’s population has been growing at only 0.27% a year on average over the past decade, much lower than the rate for the world as a whole. The EU population is older too, with an estimated median age of 41.9 years compared to 29.2 years for the world. In an interlinked world, demographic change outside the EU affects us too. As the EU’s share of world population shrinks, realising the potential of each European citizen becomes ever more crucial both for that citizen themselves and for Europe as a whole. Examples cited by the speakers included doing more to prevent school drop-outs, or, at the other end of the age range, encouraging and enabling older workers to stay fit and in work if they want to and can.

Some recent research was cited which suggests doing more varied work tasks actually helps slow cognitive decline as we age. So embracing change and designing future career paths and life in general to bring more variation and interest to our lives could be beneficial.

European Year for Active Ageing and Solidarity between Generations (2012)

How satisfied are people with their lives in the European Union?

A text from Ursula STAUDINGER, prepared for a previous event 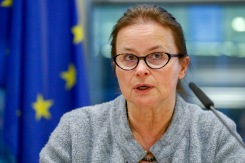