How the EU budget is spent: Cohesion Fund

The Cohesion Fund is one of the European Structural and Investment (ESI) Funds used to help EU Member States achieve economic, social and territorial cohesion, thus reducing disparities between regions. The funding supports large-scale investments in environmental sustainability, including through an increase in renewable energy use and energy efficiency, and in transport infrastructure, especially the trans-European transport networks (TEN-T). The Cohesion Fund is available exclusively to Member States with per capita gross national income of less than 90% of the EU average. In the current programming period, 15 Member States meet these requirements (known as ‘cohesion countries’): Bulgaria, Croatia, the Czech Republic, Cyprus, Estonia, Greece, Hungary, Latvia, Lithuania, Malta, Poland, Portugal, Romania, Slovakia and Slovenia.

The Cohesion Fund allocation for 2014-2020 is €63 396.06 million, this is 14% of total ESI Funds allocation and almost 7% of the total EU Multiannual Financial Framework. The biggest recipient of the fund in absolute terms is Poland, followed by Romania. Estonia and Slovakia receive the highest support per inhabitant (see Map 1).

The projects supported by the Cohesion Fund focus on five thematic objectives:

Listen to podcast: How the EU budget is spent: Cohesion Fund

Projects benefiting from the Cohesion Fund are implemented through shared management by the Member States and the European Commission. Like the other ESI Funds, the Cohesion Fund is implemented through operational programmes, drawn up at national level due to the fund’s national rather than regional character. The national authorities select the projects co-financed by the fund.

The Cohesion Fund has been operating continuously for more than 20 years. Its impact, especially with regard to development of environmental and transport infrastructure in the ‘cohesion countries’, is considered positive. The fund is an important contributor to public investment in (particularly underdeveloped) infrastructure in the eligible Member States.

Read the complete briefing on ‘How the EU budget is spent: Cohesion Fund‘. 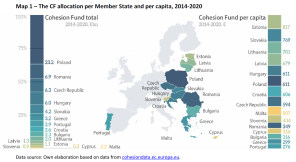 The Cohesion Fund allocation per Member State and per capita, 2014-2020 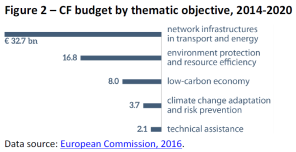 The European Structural and Investment Funds

Legal framework of the Cohesion Fund