As the British historian, Mary Beard, highlighted this week, although women now sit alongside men in parliaments and government, powerful women – and the association of women with power – continue to elicit strong, negative reactions. For a telling illustration, Beard cites the use of Greek mythological imagery to depict the democratic candidate, Hillary Clinton, in the recent US presidential election. Similar misogynist imagery was used a hundred years ago to vilify women campaigning for the right to vote. In today’s age of digital and social media, the vituperation encountered by female leaders remains a barrier to women wishing to enter – and thrive – in politics and other areas of leadership.

The question of how women running for office are covered in the media and what impact this has on their chances of being elected was one of the issues addressed in a round table on empowering women in politics, organised to mark International Women’s Day. The lively discussions also covered ways to challenge the multiple other obstacles to women’s participation, and actions to improve gender balance.

Speaking about their own experiences as women in politics, the EP’s Vice-President, Mairead McGuinness (EPP, Ireland), and Angelika Mlinar (ALDE, Austria) both noted how incredulous their younger selves would have been to discover that equality has still not been achieved. Both also highlighted the need for less talk and more concrete action. This could mean supporting women coming up through the ranks, at the grassroots and in local politics, or women entering politics at a later stage in their careers. It could also mean introducing quotas – an option which the vice-president had rejected in the past, but has now come to support as one way of challenging women’s invisibility in the political sphere. Quotas are not about numeric 50/50 parity, but about creating the kind of political system that allows both men and women to participate and giving the electorate real choices about who will represent them. Angelika Mlinar also stressed that quotas are one option that will be considered in her political party in Austria, if the current share of 18 % of women does not improve. For her, too, it is important to focus on what needs to be achieved to ensure that policy and legislation are not gender blind and fully reflect the different life experiences of women and men. This kind of gender awareness will only happen if both sexes are represented.

The current situation in the European Parliament

The latest figures on gender balance in the European Parliament were presented by EP Vice-President, Dimitrios Papadimoulis (GUE, Greece), who noted that since the first directly elected legislature in 1979, the percentage of women MEPs has risen after each election from 16.6 % to the current 37.4 % (281 MEPs), which is above both the EU and world average for national parliaments.

Under-representation of women in the media

Ensuring that true gender representation is achieved could include ensuring that women candidates get more coverage in the media and from political parties, as their relative invisibility is one of the barriers to their electoral success. Presenting the results of their long-term research into European elections, Susan Banducci, Maarja Lühiste and Laura Sudulich noted that women candidates are under-reported in news media. Findings from eight ‘new’ EU Member States (Bulgaria, Cyprus, Croatia, Hungary, Latvia, Lithuania, Malta and Poland) show that during the 2014 EP elections, women got less attention than their male counterparts and below their relative share of those standing as MEPs. In Lithuania, women made up 30 % of candidates, but received only 3 % of the news coverage. In Croatia, 50 % of candidates were women, with media only giving 20 % coverage. Women were also four times more likely to have references made to their appearance, and less likely to be challenged on issues. Female candidates who used social media had higher visibility and coverage in other media – and crucially, where visibility was higher, more women were elected. More and better media coverage, as Maarja Lühiste explains, would also shape future opportunities, by influencing women’s decisions to run for office, political party candidate choices, and young people’s perceptions of politics as a suitable career for women. 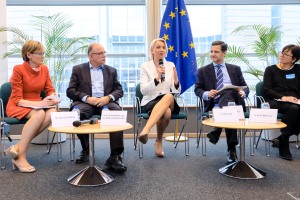 Is politics currently a world in which we would want our daughters – or sons – to be involved? Politics can be a very harsh environment, particularly so for women – and social media is a case in point. Although platforms such as Twitter give women candidates and politicians a direct channel to reach the public and avoid gender-biased media coverage, they are not necessarily ‘women-friendly’. A panellist’s feeling that women come in for specific harassment, particularly when they take a strong stance on certain issues, is backed up by a survey of women politicians across 39 countries issued by the Inter-parliamentary Union in October 2016. The survey finds that, ‘social media have become the number one place in which psychological violence – particularly in the form of sexist and misogynistic remarks, humiliating images, mobbing, intimidation and threats – is perpetrated against women parliamentarians’. Moreover, 60.5 % of the respondents say that such acts are ‘strongly motivated by the clear-cut positions they had taken on particular issues’ and that taking a stance on ‘controversial subjects, such as defending women’s rights and human rights in general’ had made them particular targets of sexist behaviour and acts of violence. The IPU concludes that harassment against women politicians, both online and offline, is a global phenomenon which hinders their work. Despite this, 80 % of the respondents who had been victims of harassment said they would continue with their mandate or run for another term. The question remains as to whether parliaments – and social media platforms – are doing enough to counter abuse.

Who has power and what is it for?

Given the current state of politics in general, and the growing distance between politicians and the electorate, what difference, if any, might more women in politics make?

The World Economic Forum suggests that ‘women’s engagement in public life fosters greater credibility in institutions, and heightened democratic outcomes’. One factor may be that having more women representatives encourages more women to get involved in the political process. However, the positive effect may also depend on the wider context, specifically the relationships that politicians, whether female or male, have with communities and individuals at the grassroots level, and how responsive they are to their concerns and demands. This point was also made by the Indian scientist and activist, Dr Vandana Shiva, speaking at the European Parliament on International Women’s Day. In her words, people talk about empowering women as though someone has to do them a favour, but women already have power. The real issue is to remove what disempowers them and prevents them from exercising the power they have. In the case of politics, this also means changing the way we understand power and what it is for.

« EU Research Policy: Tackling the major challenges facing European society
Outcome of European Council meeting of 9 March 2017 and of informal meeting of the EU27 of 10 March 2017 »