What future for global trade?

Worldwide, countries are facing major international trade challenges. Trade policy was at the forefront of the 2016 United States presidential campaign, and the new US administration’s approach leans toward global trade restriction. Protectionist pressures, not to mention concerns regarding the potential effects of Brexit, are increasing on the world stage. Against this backdrop, the EPRS External Policies Unit and the Secretariat of Parliament’s Committee on International Trade organised a joint event on ‘What future for global trade?’, on 9 March 2017. The objective of the roundtable discussion, which brought members of European and third country parliaments and trade experts together, was to analyse some of the main issues that might influence future global trade flows and negotiations. The discussion followed the 38th session of the Steering Committee of the WTO Parliamentary Conference, held on the same day. MPs from third countries taking part in the WTO meeting, along with their European counterparts, also participated in the event.

Although the general consensus was that trade is beneficial for societal welfare and contributes to reducing world poverty, the discussion revealed that the opinion that global trade is unfair and trade benefits are not equally distributed is growing worldwide. Speakers agreed that this criticism of rising inequality in the globalised trading system cannot be ignored, and that reflection is necessary, particularly from, on how to address this problem. Moreover, it was agreed that a commitment to a rules-based trading system is needed.

Bernd Lange (S&D, Germany), Chair of the Committee on International Trade, pointed out in his keynote speech that trade is the engine for growth and employment in the EU. To gain clear support from citizens, the EU needs a trade policy that, in addition to the technical aspects such as trade barriers, also deals with the need for a stable society and allows for a more equal division of the benefits of trade. To reach these objectives, Lange called for transparency, not only with respect to EU trade policy targets and tools, but also as regards World Trade Organization activities. Lange called for a fair, inclusive, and more transparent trade policy, continued support for a rules-based trading system, and a commitment to the multilateral approach. 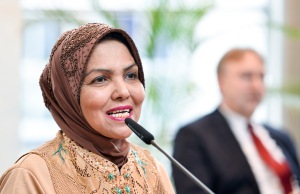 Nurhayati Ali Assegaf, Member of the Indonesian Parliament, stated that, more importantly than liberalising trade, the global trade system must create equal opportunities and improve citizens’ prosperity. Ali Assegaf noted that the WTO’s Bali Package was a major breakthrough; delivering on the commitments of the Bali Package and getting the WTO back on track should be seen as a priority in formulating international trade governance. On the other hand, the WTO has to also reach out to marginalised and most vulnerable persons. The Indonesian House of Representatives is therefore a proponent of a just and fair multilateral trading system.

The temptation of protectionism

Speakers also reflected on a current major trade concern, the new US administration’s trade policy. Professor of Economics Paola Conconi of the Université Libre de Bruxelles argued that during the approach to elections, US politicians in general tend to become more protectionist, and this trend can also be observed in the number of WTO disputes initiated. President Trump is therefore not unique in his rhetoric; nevertheless, great uncertainty exists as regards his future actions. Similarly, Peter Chase, Senior Fellow at the German Marshall Fund, noted that, as many citizens view trade as unfair, Donald Trump was not alone among presidential candidates moving towards a protectionist stance during the presidential campaign. On the basis of the March 2017 US Trade Representative policy agenda, among other factors, Chase suggested that the new US administration will follow a ‘mercantilist’, rather than protectionist, trade approach, reflecting the influence of policy-makers associated with the manufacturing sector. Pierre Sauvé, Senior Trade Specialist at the World Bank Group, stated that if we look at the slowdown in cross-border trade in recent years, it is evident that different factors, some of a cyclical nature, others more structural in character, such as far-reaching technological change, affecting manufacturing and service industries alike, are in play. Sauvé noted that the influence of trade and investment protection is not on the whole as significant as might be assumed. Protectionism is generally held in check thanks to the WTO’s close monitoring. However, more recently, it seems that policy uncertainties are influencing consumption and investment decisions.

Peter Chase suggested maintaining a ’wait-and-see’ stance, as the Trump administrations’ approach to trade may change and become more moderated. Recommending that countries with mercantilist policies review the benefits of such an approach, and Chase argued that focusing on respect of the rules-based system can lead to enforcement of the WTO regime. Pierre Sauvé, while mentioning the growing uncertainties regarding trade rule-making and international cooperation, highlighted that significant advances have been made in multilateral trade governance and in preferential trade and investment rule-making recently, for instance, the conclusion of the EU-Canada trade agreement. Sauvé underlined that more serious commitments at national level and for international cooperation are needed to address the distributional downsides of globalisation. Pierre Sauvé also mentioned that these developments will nevertheless not lead to the end of global value chains. Furthermore, Paola Conconi explained that the outcome of the Brexit negotiations depends to a large extent on the rules of origin on which the EU and the United Kingdom agree, which in turn will affect global value chains, as they will have a significant impact on sourcing decisions.

« Towards low-emission EU mobility
Summertime: changing of the clocks, but why? »