The state of transatlantic relations as President Trump visits Europe

On 25 May 2017, US President Donald Trump attends the NATO Summit in Brussels, as well as meeting with top EU officials, including the Presidents of the European Commission, Jean-Claude Juncker, European Council, Donald Tusk, and European Parliament, Antonio Tajani. The following day, he will attend the G7 summit in Taormina, Italy. These visits are part of his first trip abroad as president, which has also included visits to Saudi Arabia, Israel, and the Vatican. 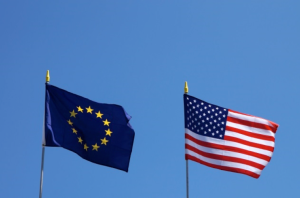 Unpredictability has marked President Trump’s first four months in office, and many analysts have yet to discern a clear strategic direction in his foreign policies. Since the EU and US share common interests and cooperate in many areas, Trump’s disjointed approach to foreign policy has caused uncertainty in Europe. President Trump’s proposed budget cuts for FY2018 (with a 28 % cut to the State Department and a 10 % increase in defence spending) have raised concerns on both sides of the Atlantic over a possible US retreat from its leadership on human rights and development. Relations with Russia have fluctuated significantly. President Trump has also notably altered his stance on some issues; for example, he rescinded his early comments referring to NATO as ‘obsolete’, and has sought to maintain good ties with China. Thus far, his policy towards the Middle East has not constituted a radical departure from that of the previous administration, though as with his interactions with other world leaders, he has brought a personal touch to his exchanges with leaders from the region. As for the EU, President Trump has not publicly addressed US relations with Europe in the first months of his presidency beyond acknowledging the value of a strong Europe during an April meeting with the Italian Prime Minister. Thus, the outcome of his visit to Europe will be important in establishing how EU-US relations will develop under the new administration.

In order to shed light on the current state of transatlantic relations in the context of these important visits, it is useful to look back at the first months of the Trump Presidency, as well as more broadly at EU-US cooperation, which remained significant in many areas.

President Trump’s first months in office: The course of transatlantic relations
Briefing by Elena Lazarou with Jessica Parks and Georgios-Konstantinos Barzoukas, May 2017

The incoming US Congress’s powers to overturn regulations of the previous administration
At a glance note by Micaela Del Monte, January 2017

Role of the US Congress in Trade Agreements: The ‘Fast Track’ Procedure
In-depth analysis by Micaela Del Monte and Laura Puccio, March 2016

Oversight of the US executive – The Congressional experience and its lessons for the EU
In-depth analysis by Cornelia Klugman, November 2016

Congressional oversight of the US Administration: Tools and agencies
Briefing by Cornelia Klugman, November 2016