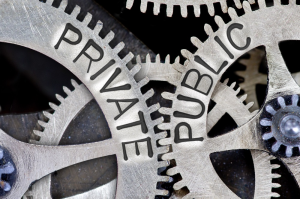 Around 70 EU public-private partnerships (PPPs) in research help define common priorities and visions for EU, national and regional research and innovation activities. Six different types of PPPs now exist. They were first set up in the context of the development of European Research Area policy in 2003 with two main objectives. Their first goal is to address the fragmentation of research efforts between the private and public sector and across borders. Secondly, they seek to increase public and private investment in research activities to reach the target of 3 % of EU gross domestic product. The first PPPs – the European Technology Platforms and the Joint Technology Initiatives – were developed to achieve these objectives.

The initial focus of the PPPs on research activities was broadened in 2005, with the introduction of a more comprehensive view of innovation. The European Institute of Innovation and Technology and its Knowledge and Innovation Communities were set up to embody this new vision by promoting the integration of research, innovation and education activities. European Industrial Initiatives were created in 2007 in the field of energy, to support the implementation of the EU strategy in that area. The 2008 financial crisis subsequently demanded swift action to support investments in research and led to the establishment of the rapidly implemented contractual PPPs. By 2010, the focus on technology challenges had been replaced by the need to tackle societal challenges. The European Innovation Partnerships provided a new tool to better address these challenges by integrating all the actors of the innovation process.

However, the multiplication of PPPs created a new form of fragmentation with different types of PPPs focusing on similar fields. The 3 % target was missed (currently at 2.03 %). The share of private investment in research has stagnated at around 55 % since 2004, whereas the share of the budget of the EU framework programme for research (FP) dedicated to the PPPs has more than doubled (9.1 % for FP7 versus 21.5 % for Horizon 2020). All these aspects will have to be considered when setting the budget for the PPPs in FP9.

The six types of EU PPPs in research

European Technology Platforms (ETP) were the first type of public-private partnership established in the research field at European level. These industry-led stakeholders’ fora define and implement a strategic research agenda (SRA) aiming at aligning research priorities in a technological area. Without dedicated funding, ETPs remain coordination and advisory structures, helping to define the topics of research programmes at European, national and regional level.

Joint technology initiatives (JTIs) were set up as European institutional public-private partnerships to carry out the strategic research agenda of some established European technology platforms. Five JTIs were established under the 7th framework programme for research. Evaluation of these JTIs led to development of their legal framework to simplify their rules and procedures. Six JTIs are currently operational, receiving a €6.7 billion contribution from Horizon 2020.

Knowledge and Innovation Communities (KICs) are long-term pan-European autonomous networks of higher education institutions, research centres, private companies and other stakeholders, set up to provide innovative solutions to societal challenges: climate, energy, health, information technologies, raw materials, food and manufacturing. They are developed and funded by the European Institute of Innovation and Technology (EIT) since 2010.

Following the adoption of the European strategic energy plan (SET plan) in 2007, the European Commission proposed establishing European industrial initiatives (EII) as public-private partnerships to implement research agendas for the development and deployment of low carbon energy technologies. In 2015, the energy policy review under the energy union led to the EIIs merging with existing European technology platforms (ETP) to create nine European technology and innovation platforms (ETIP). They operate similarly to other ETPs, but are bound to SET plan implementation.

The first three contractual public-private partnerships in research were established as a tool to address the 2008 financial crisis. Their main feature is prior consultation of industry in defining the topics of the calls in the framework programme for research. This allows better alignment of the topics with industry needs, especially regarding demonstration projects, increasing the participation of private actors in the programme. The scheme, easier to establish than institutional public-private partnerships such as the joint technology initiatives, was extended under Horizon 2020 with a budget of €7.15 billion ring-fenced for 10 of these partnerships (almost 10 % of the programme’s budget).

The European innovation partnerships (EIP) were launched in the context of the innovation union flagship initiative in October 2010. They were set up with the aim to promote the implementation of a new innovation ecosystem in Europe. The EIPs were meant to act across policies, sectors and borders to tackle societal challenges and enhance Europe’s competitiveness. A 2014 evaluation concluded that this objective would not be reached given the framework used for their implementation. With no evolution in their governance, the EIPs remain active as coordination instruments for research and innovation activities at EU level in their respective fields.