The EU, Middle East and North Africa [What Think Tanks are thinking] 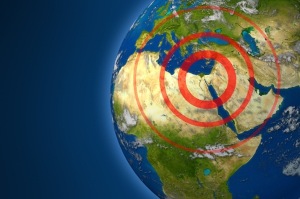 Developments in the Middle East and North Africa (MENA) pose a growing challenge for the European Union. Many countries of the region face war, political turmoil and popular anger, due to the impact of poverty in generating instability, migration and in some cases terrorism.

The EU wants to contribute to stability in MENA through such instruments as the European Neighbourhood Policy and the Union for the Mediterranean, but there are calls for the EU to play an even more active role in the region.

This note offers links to recent commentaries and reports by major international think tanks on EU-MENA relations and the general problems found within the region and some specific countries. More reports on the region can be found in a previous edition of ‘What Think Tanks are Thinking’ published in August 2016.

Effectiveness and potential of European Trade and Assistance Policies in the South Mediterranean Neighbourhood in the fields of agriculture, water and rural development
Istituto Affari Internazionali, September 2017

The case for a Euro-Arab summit
Centre for European Policy Studies, September 2017

Trump, Europe and the Middle East peace process: A path out of the quicksand
Centre for European Reform, June 2017

Towards a recalibration of EU-North Africa relations
Brookings Institution, May 2017

Did the European Union light a beacon of hope in North Africa? Assessing the effectiveness of EU democracy promotion in Tunisia
College of Europe, May 2017

The EU’s construction of the Mediterranean (2003-2017)
Istituto Affari Internazionali, April 2017

Theorizing the role of experts in shaping Euro-Mediterranean politics, at a time of erosion of democratic legitimacy and emergence of contested issues
European Institute of the Mediterranean, April 2017

EU differentiation and the push for peace in Israel-Palestine
European Council on Foreign Relations, October 2016

The new EU Global Strategy and what it means for Morocco
OCP Policy Center, September 2016

The political economy of energy subsidies in Egypt and Tunisia: The untold story
Oxford Institute for Energy Studies, August 2017

How can renewable energy help contribute to the development of the MENA countries?
Istituto Affari Internazionali, July 2017

Financing renewable electricity in the resource-rich countries of the Middle East and North Africa: A review
Oxford Institute for Energy Studies, February 2017

Security and other issues

Civil-military relations in the MENA: Between fragility and resilience
European Union Institute for Security Studies, October 2016

Iraq after the fall of ISIS: The struggle for the state
Chatham House, August 2017

The geographic trajectory of conflict and militancy in Tunisia
Carnegie Endowment for International Peace, July 2017

On the emergence of an Arab democracy: Social divides and political compromises in Tunisia
Konrad Adenauer Stiftung, July 2017

The summer of our discontent: Sects and citizens in Lebanon and Iraq
Carnegie Endowment for International Peace, June 2017

Cybercrime and the digital economy in the GCC countries
Chatham House, June 2017

The future of jobs and skills in the Middle East and North Africa: Preparing the region for the fourth industrial revolution
World Economic Forum, May 2017

Marginalization, young people in the south and east Mediterranean, and policy
Istituto Affari Internazionali, May 2017

Lessons to be learned from other experiences of socio-economic transformation for youth in the SEM region
Istituto Affari Internazionali, May 2017

Building partnerships in challenging times: The defence arrangements of Tunisia
European Institute of the Mediterranean, May 2017

The Syrian chessboard: Prospects for the future after six years of carnage
Center for International Relations, May 2017

Future of Syria
European Institute of the Mediterranean, April 2017

Refugees and displacement in the Middle East
Carnegie Endowment for International Peace, March 2017

Local wars and the chance for decentralized peace in Syria
Carnegie Endowment for International Peace, March 2017

Turning the tide: The politics of irregular migration in the Sahel and Libya
Clingendael, February 2017

The EU and Libya: Realism or irrelevance
Centre for European Reform, February 2017

Methods of preventing and combatting terrorism in the MENA region and in the West
Friedrich Ebert Stiftung, January 2017

Against the rising tide: An overview of the growing criminalisation of the Mediterranean region
Rand Europe, January 2017

Cross-cutting challenges and their implications for the Mediterranean region
Rand Europe, January 2017

Neighbouring host-countries’ policies for Syrian refugees: The cases of Jordan, Lebanon, and Turkey
European Institute of the Mediterranean, January 2017

After ISIS: How to win the peace in Iraq and Libya
European Council on Foreign Relations, January 2017

Guests or trash: Iran’s precarious policies towards the Afghan refugees in the wake of sanctions and regional wars
Danish Institute of International Studies, December 2016

Re-conceptualizing orders in the MENA region: The analytical framework of the MENARA project
MENARA, November 2016

Read this briefing on ‘The EU, Middle East and North Africa‘ on the Think Tank pages of the European Parliament.