What if technologies replaced humans in elderly care? [Science and Technology podcast] 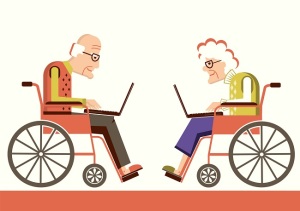 Europeans are ageing. In 2016, there were 3.3 people of working-age for each citizen over 65 years. By 2070, this will fall to only two. As the population lives longer, our care needs grow, but fewer people will be available to deliver them. Could assistive technologies (ATs) help us to meet the challenges of elderly care?

It is also worth noting that all technologies are, to an extent, assistive, in the sense that they help people to achieve things more quickly, easily or effectively than would otherwise be possible. While ATs are designed specifically in response to impairments, people, impaired or not, regularly use all kinds of technologies to augment their personal abilities. As such, many insights that refer to ATs will also be relevant for mainstream technologies, and vice versa. Furthermore, technologies can be disabling in cases where new developments make services less accessible to some users, as can be the case where button-based interfaces are replaced by touchscreens that do not account for the needs of blind users.

In 2016, the European Parliament’s Panel for the Future of Science and Technology (STOA) conducted a study of ATs for visual and hearing impairments, both of which are particularly prevalent amongst older citizens, and anticipated to increase along with the ageing European population. For visual impairments, ATs are sometimes designed to augment the affected sense, such as traditional reading glasses or screen magnifying applications, while others convey visual information via other senses, such as touch or sound. The latter include traditional low-tech devices such as white canes and Braille texts, as well as embossed or tactile maps and textured surfaces to support navigation. There are also high-tech equivalents, such as smart canes, haptic computer devices and text-to-speech converters. In the future, augmented reality spectacles may help users by magnifying images, filtering colours and providing object and facial recognition assistance by audio. One day, it may even be possible to repair or replace specific body parts, for example with ‘bionic eyes‘, which convert light to electrical impulses that are transmitted directly to the user’s nervous system. For hearing impairments, ATs can also make use of the affected sensory modality, as is the case for hearing aids, which amplify certain sound frequencies, and cochlear implants, which are surgically implanted sensors that convert sound inputs into electrical signals that are directed to the auditory nerve. Other ATs for hearing impairments make use of different senses, for example by alerting the user – via light, vibration or a combination of the two – about specific events that would usually be perceived audibly. Taking this further, text and video technologies can be used as a substitute for verbal communication. In future, advanced versions of many of these technologies, such as advanced auditory brainstem implants, could bypass the ear entirely, stimulating brainstem neurons directly. Augmented reality glasses (already mentioned in the context of visual impairments), could be used to communicate audio signals in the form of text.

Regarding mobility impairments, which are also often associated with old age, ATs such as mobility scooters and home stair lifts have been available for some time, as well as mainstream mobility technologies such as elevators. Future developments may include care robots that help users to move from their bed to their wheelchair and bathtub, and a proliferation of ATs to assist with the independent performance of daily tasks such as personal care, timekeeping, shopping, appliance use, and food preparation and consumption. While many of these ATs may be used by people with disabilities of all ages, other ATs are designed specifically for elderly users. For example the robot seal designed for dementia sufferers as well as other elderly people at risk of social, cognitive or emotional isolation.

Depending upon their implementation, such ATs might support and augment human care and companionship. Perhaps taking care of some of the more difficult tasks would enable elderly people to live with greater autonomy and independence for longer, and free up resources which could be used to enable other meaningful human interactions. However, there are also potential ethical risks. If ATs were to replace human contact, this would carry risks of isolation and alienation. In this sense, the aspiration for independence and autonomy in old age may conflict with the value of social inclusion and integration of elderly citizens. Some vulnerable people may experience illusory relationships with technical artefacts that could never reciprocate their feelings. In extreme cases, reliance on ATs for elderly care could leave vulnerable people with less regular human-to-human contact, which may also have health implications.

While future ATs are promising, current ATs are not used to their full potential. A more effective promotion of the distribution and use of existing ATs could provide more immediate benefits than developing more advanced ATs. In this sense, social and regulatory action may be more important than technological development. While ATs offer significant support for some aspects of people’s lives, it is also important to consider social and regulatory action for social inclusion. For example, while ATs may ensure elderly citizens’ functional capability to remain in employment for longer, social change may also be required in order to counteract stigma, as well as organisational changes such as flexitime and working from home.

‘One-size-fits-all’ approaches for technology and policy are not well suited to this domain because everyone has different abilities and individual circumstances. Many people have multiple disabilities, while further differences appear in their social and economic resources, as well as in their personal needs, desires and preferences. Others are subjected to multiple forms of stigma or discrimination, as highlighted in a recent report on the problems facing women with disabilities in the workplace. Each individual’s circumstances can be as important as their impairments, or the AT’s capabilities, in shaping the extent to which the AT can respond to their impairment. Technology development and policy development need to be nuanced and flexible enough to respond to this range of individual circumstances.

Effective change should target all social groups, and it is important that action to achieve inclusivity does not target elderly people exclusively. For example, the problems of discrimination and stigma require attitudinal and organisational change that permeates society. Wider actions are also required in the specific area of ATs. For example, many people will increasingly encounter ATs in their professional and personal lives, perhaps in the form of tools for facilitating communication with citizens with multiple impairments. Understanding how to engage with others effectively through these means is important for health professionals and public services, as well as for designers of digital services and infrastructure.

The establishment of a defined profession of experts in the application of ATs could play an important role in addressing several issues. As well as providing support for individuals in the adoption of ATs that respond to their specific needs and individual circumstances – including old age – they could also help individuals without impairments to interact more effectively and inclusively with people using ATs. Their experience would also be valuable in informing the development of new ATs, as well as mainstream technologies that will be used by people with and without impairments.

Read this ‘at a glance’ on ‘What if technologies replaced humans in elderly care?‘ in the Think Tank pages of the European Parliament.

Listen to podcast ‘What if technologies replaced humans in elderly care?‘ on YouTube.

The Scientific Foresight Unit (STOA) carries out interdisciplinary research and provides strategic advice in the field of science and technology options assessment and scientific foresight. It undertakes in-depth studies and organises workshops on developments in these fields, and it hosts the European Science-Media Hub (ESMH), a platform to promote networking, training and knowledge sharing between the EP, the scientific community and the media. All this work is carried out under the guidance of the Panel for the Future of Science and Technology (STOA), composed of 27 MEPs nominated by 11 EP Committees. The STOA Panel forms an integral part of the structure of the EP.
View all posts by Scientific Foresight (STOA) »
« European Parliament Plenary Session – October II 2019
Digital challenges for Europe [What Think Tanks are thinking] »