STOA Panel gears up for the new parliamentary term 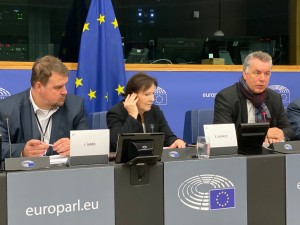 During the latest plenary session in Strasbourg, on 24 October, MEPs appointed to the European Parliament’s Panel for the Future of Science and Technology (STOA) held their first meeting to elect a Chair and two Vice-Chairs for the first half of the 9th parliamentary term. Eva Kaili, Greek MEP and member of the Progressive Alliance of Socialists and Democrats (S&D) Group in the European Parliament, will continue as Chair, carrying on from the last parliamentary term. She will work alongside Christian Ehler, a German MEP and member of the European People’s Party (EPP) Group, who was elected as First Vice-Chair of STOA, and Ivars Ijabs, Latvian MEP and member of the Renew Europe Group, who will serve as Second Vice-Chair. The meeting was chaired by Ewa Kopacz, Polish MEP, EPP member and European Parliament Vice-President responsible for STOA. The four MEPs, as members of the STOA Bureau, will work together with the other 21 STOA Panel members to support STOA’s mission: comprehensive monitoring and analysis of scientific and technological opportunities and challenges that are relevant for individual and societal progress and wellbeing.

In an ever-advancing and changing technological and scientific landscape, STOA is a vital platform for the European Parliament, constantly evolving to keep pace with developments. Through scientific foresight, technology assessment and horizon scanning, STOA provides timely assessments of techno-scientific trends to support Parliament’s committees, Members and their staff. These take the form of studies and other reports, but also events (workshops and Annual Lectures) and initiatives such as the MEP-Scientist Pairing Scheme. The net result is promoting scientific advice and dialogue as the foundation of well-informed policy decisions. The European Science-Media Hub (ESMH), under the remit of STOA, is also establishing itself as a recognised hub for direct interaction and exchange among policy-makers, journalists and other science communicators, and researchers. The ESMH promotes evidence-based practices for high-quality and trustworthy science communication through networking and training.

Highlights of the work conducted in the last parliamentary term include strategic foresight studies on robotics, precision agriculture, 3D bio-printing and assistive technologies, as well as technology assessment studies on topics linked to the information society, such as the General Data Protection Regulation, artificial intelligence, algorithms, disinformation, blockchain, harmful internet use, social polarisation, and the future of teaching and working. Sustainable management of natural resources was also a priority for STOA, examining subjects such as waste management, farming without agri-chemicals and climate change. The Panel also took an interest in health and the life sciences, with topics ranging from the Ebola outbreak, to food safety, organic food and brain research. Finally, activities relating to science policy and global networking included studies on technologies and the arts, on overcoming innovation gaps in the EU-13 Member States and on the internationalisation of EU research, and events organised jointly with the European Institute of Innovation and Technology (EIT), the European Research Council (ERC), the European Space Agency (ESA), the Joint Research Centre (JRC), the Science and Technology in Society (STS) forum and UNESCO, to name but a few.

Looking ahead to advances in science and technology and the political agenda for the next five years, the STOA Panel’s new Vice-Chair Christian Ehler predicted: “STOA will become an even more crucial instrument in the European Parliament. Now we might need STOA more than ever before”.

The STOA Panel meets regularly during the Parliament’s plenary sessions in Strasbourg. The meetings are announced on the STOA website, together with the webstreaming link and supporting documents. The new Panel will start its mandate with a discussion on the priorities and direction for STOA in the 9th parliamentary term at its meeting on 28 November 2019. The Panel Members are new, but the objective stays the same for STOA: to remain the European Parliament’s reference point for science-related advice, technology assessment and scientific foresight.

The Scientific Foresight Unit (STOA) carries out interdisciplinary research and provides strategic advice in the field of science and technology options assessment and scientific foresight. It undertakes in-depth studies and organises workshops on developments in these fields, and it hosts the European Science-Media Hub (ESMH), a platform to promote networking, training and knowledge sharing between the EP, the scientific community and the media. All this work is carried out under the guidance of the Panel for the Future of Science and Technology (STOA), composed of 27 MEPs nominated by 11 EP Committees. The STOA Panel forms an integral part of the structure of the EP.
View all posts by Scientific Foresight (STOA) »
« European Cyber Security Month
The powers of the European Parliament »