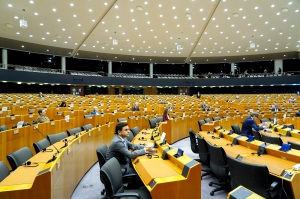 The need to observe strict sanitary measures, in view of the COVID-19 contagion, requires a flexible response from everyone. Consequently, the European Parliament organised and conducted its March II plenary session with new precautionary measures, allowing it to act rapidly to carry out its essential legislative function during the crisis. Parliament’s Bureau put in place an alternative voting procedure for the 26 March extraordinary plenary session. The new procedure meant that all Members – with most unable to be present in Brussels – could vote from a distance, sending their voting papers to Parliament’s Secretariat by e-mail. Parliament has adjusted its calendar, replacing the regular plenary part-sessions with shortened sessions until the summer. The temporary voting procedure will be available until 31 July 2020, unless extended by Bureau decision. Moreover, the Secretariat is working to put in place a more advanced remote voting system, which would enable more complex votes to be held among Members, in both committee and plenary, thus ensuring Parliament can carry out its essential budgetary and legislative functions throughout the ongoing public health crisis.

The session focused on three urgent legislative proposals responding to the coronavirus pandemic. Parliament adopted its positions on temporary suspension of EU rules on airport slots, creation of a Corona Response Investment Initiative and extension of the EU Solidarity Fund, almost unanimously, less than two weeks after the European Commission tabled its proposals. With the Council also agreed on the three texts, the measures can now be adopted in the coming days. Members also heard from the Commission and Council on the coordination of the European response to the COVID-19 outbreak.

Allocation of slots at airports in the EU: Common rules

The Parliament adopted a proposal seeking to amend the common rules on allocation of slots at EU airports. The Commission proposed to temporarily suspend rules obliging airlines to use their slots. The suspension until October 2020, with retroactive effect from 1 March 2020, will ensure legal certainty for air carriers, given the grounding of aircraft due to the drop in demand for flights and widespread travel restrictions. It will also end unnecessary emissions from near-empty (‘ghost’) flights that carriers might have been tempted to operate to maintain their rights. Under the current regime, known as the ‘use it or lose it’ rule, airlines must use their slots at least 80 % of the time during the period for which they are allocated, or see the slots, which are a valuable resource, allocated to others.

Parliament adopted an initiative introducing specific measures mobilising a total of €37 billion of cohesion fund investment in Member States’ healthcare systems, as well as initiatives to provide support to SMEs in the form of working capital, and to specific mutual funds supporting fishermen. The Coronavirus Response Investment Initiative will reallocate unused cash reserves available under the European structural and investment funds. The Commission will now use unspent 2019 advance payments to Member States to release €8 billion of investment liquidity to kick-start the initiative, with expenditure on crisis-response capacity eligible for funding retrospectively from 1 February 2020.

Extension of the EU Solidarity Fund

Members adopted the proposal extending the scope of financial assistance already available to Member States and accession candidate countries under the EU Solidarity Fund. The Fund intervenes to help countries hit by major natural disasters. The Parliament agreed that EU-level intervention under the Fund is also justified in the case of a major public health emergency, such as the COVID-19 outbreak, including medical assistance, as well as measures to prevent, monitor or control the spread of diseases. Disbursement will now be speeded up, and advance payments raised to 25 % of the expected EUSF contribution (limited to €100 million) for countries seriously affected by the crisis.

Read this ‘at a glance’ on ‘Plenary round-up – Brussels, March II 2020‘ in the Think Tank pages of the European Parliament.

Read all EPRS publications on the coronavirus outbreak