Flying remains one of the safest forms of transport, and the EU’s accident rate is lower than in the rest of the world. However, it cannot automatically be assumed that such performance will continue, as global air traffic is forecast to double over the next 20 years. New technologies, such as unmanned aircraft (drones), are also appearing in European skies, which require adaption of the current regulatory framework.

In December 2015, the European Commission proposed to update aviation safety rules. Two years later, the European Parliament and the Council reached a provisional agreement on the new rules and the rules have been in force since 11 September 2018. The reform includes the first-ever EU rules for civil drones, extends the EASA’s mandate and provides for using existing resources more efficiently. 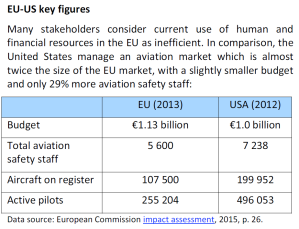